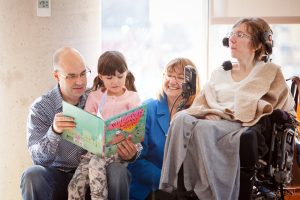 According to my rough calculations, about 249,000 people in Atlantic Canada have disabilities, myself included. The number of authors with disabilities of varying kinds is beyond my calculations, but the publishing industry should ask whether disability issues are adequately covered in their books. Though no publisher in Atlantic Canada deals specifically with disability issues, for many it could be part of their mandate.

None of Pedlar Press’s titles deal directly with disability issues but Beth Follett, owner and publisher, says: “Many of Pedlar’s fiction and poetry titles address mental and physical disabilities, however indirectly, by having a character struggle with a hegemonic and able point of view. I think at this time in Western history, any book that asks a reader to consider the struggles of others, that challenges egocentrism, that addresses social causes of hardship, is important and relevant.” She feels Pedlar adequately addresses disabilities.

The state of disability issues today, as represented in Atlantic Canadian books, is now covered by my book, Just Jen, a new publication by Roseway Publishing, and by Hot, Wet and Shaking by Kaleigh Trace, published in 2014 by Invisible Publishing (which has since relocated to Ontario). Hot, Wet and Shaking, which won the 2015 Evelyn Richardson Non-fiction Award, is set in Halifax. Both deal with the reality of living with a disability but still having the desires that the media tends to restrict to the able-bodied. Hot, Wet and Shaking was an inspiration for me. It gave me the courage to include information about my sex life in Just Jen.

Roseway publisher Beverley Rach says, “Roseway Publishing’s mandate is to publish literary works related to social injustices and the struggles involved in making the world a better place. We are particularly interested in publishing voices that traditionally have not had access to publishing.”

Invisible Publishing approached Kaleigh Trace–through then director Robbie MacGregor–to write Hot, Wet and Shaking after seeing her blog “Fucking Facts.” The book includes details of her journey in becoming herself. Trace describes herself as “a tough-as-fuck woman with a disability.” Hers was not the first book on sex and disability in Canada, but it was the first in Atlantic Canada. Trace feels more vulnerable now about the book, which includes explicit details on her thoughts and insights, than she did in 2014.

“I think the vulnerability I feel now around the book is about aging and being a different person now than I was as a relatively brazen 27-year-old,” she says. Addressing why the public doesn’t see disabled persons as sexual, Trace comments that “systemic ableism has done an effective job at making [people with disabilities] less visible to the world in general. Coupled with that, beauty standards very rigidly uphold a white, able-bodied and thin portrayal of desirability.”

Trace thinks that the visible fallibility of disabled bodies–that they fall, that they limp, that their physical form is weak–reminds people of their own mortality. “I think [this] subsequently makes people uncomfortable.”

Publishers, rather than taking on a project about a disability, may pass a book proposal to a publisher they feel is more appropriate. Whitney Moran, senior editor with Nimbus Publishing, says, “We in the Atlantic Publishing industry are a tight-knit group, and sometimes if a project comes along that we see as a good fit for one of our peers, we pass that information along either to the publisher or to the submitting author.”

That is what happened with my initial submission of Just Jen. Nimbus turned it down, suggesting I go to Roseway. They were right. Roseway chose to publish my memoir, which hit bookstores May 1.