Approaching the Precipice of Climate Change 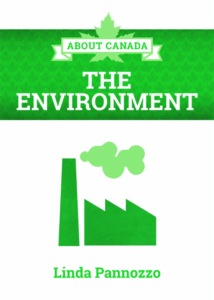 Linda Pannozzo is an award-winning freelance journalist and researcher who has written widely about ecological degradation and public policy issues for nearly two decades. Just in time for Earth Day, Pannozzo answered some of our questions about her latest book from Fernwood Publishing, About Canada: The Environment.

ABT: You’ve been writing about and researching environmental issues for almost twenty years. Why are these topics so important to you?

Linda Pannozzo: Since I can remember I’ve always felt a deep kinship with the natural world, particularly to the other species we share the planet with—or at least should be sharing the planet with. In my early teens I started to become aware of how we exploit the living world—oppressing it, really—in a way that is not unlike other forms of oppression that seek to control, subjugate and abuse. The difference is that nature has no voice, so I am always moved to advocate on its behalf.

ABT: Why is this book necessary right now?

Pannozzo: I think the obvious answer is that, globally, we seem to be nearing a tipping point, from which there may be no turning back. As daunting and unpredictable as it is—with feedback loops and unforeseen consequences—climate change is a reality that we need to address collectively as a species. It’s a trajectory we’ve been on ever since we started powering our insatiable economies with coal two hundred years ago. But we’ve squandered so much time already—time that could have been spent working toward a better future for all beings.

But even though the science on this is in, the political will to truly address this is absent in Canada (and elsewhere). International climate negotiations and the targets and timelines that result have not provided the kind of measures, direction or inspiration necessary. Instead they are a diversion from the real shifts in thinking that need to take place.

The less obvious answer to the question is that governments are no longer accountable to the people. The power struggle between the elite and the rest of us has been going on for a long time, and has taken many forms, but today it takes the form of neoliberalism or market-driven economic theory that argues, ultimately, that the right to unimpeded profits supersedes the political rights and interests of the public, including their very real interest in maintaining our life support systems, or healthy ecosystems. What is most troubling, and why I feel this book is “necessary right now” is because even though this hands-off approach to economics is detrimental to the interests of ordinary people and the planet, governments of all stripes advance these policies and continue to get re-elected.

ABT: How did you go about tackling so many complex issues in a succinct and accessible way for the book?

Pannozzo: I tackle large topics like this one in small chunks, but always with an eye to the larger project. It’s the only way, otherwise I get overwhelmed. I think what makes it accessible is that I’m not an expert in any one field and so I come to a topic from the perspective of someone who is learning about it. Because of that, explaining it in a way that is understandable to the public comes more naturally.

ABT: One chapter is named “Becoming Indigenous,” can you explain what that means?

Pannozzo: What I tried to do in the book is examine the philosophical, economic and ideological landscape of our current worldview and how the solution to our environmental problems requires a profound shift in our way of thinking about, and relating to the natural world. One of the authors I cite often in the book is Robin Wall Kimmerer, an Anishinabekwe scientist and botanist and author of Braiding Sweetgrass: Indigenous Wisdom, Scientific Knowledge, and the Teachings of Plants. In her wonderful book—a must read for anyone interested in these issues—she says that Indigenous cultures had rules governing what they took from the living world. While the details of these rules were specific to different cultures and ecosystems, there were fundamental principles of restraint that were common among those who lived close to the land. These rules helped “rein in our tendency to consume,” something all humans struggle with. We don’t seem to have any rules governing our consumption.

Kimmerer describes being oriented in the world in such a way that you recognize and understand the earth to be sacred. She describes the “cultures of gratitude” and the “cultures of reciprocity,” where all beings were bound by a reciprocal relationship where it wasn’t enough to just take, you also had to give back.

Keeping in mind this relationship of reciprocity founded on gratitude, there is a line from her book that really resonated with me: “Becoming indigenous to a place means living as if our children’s future mattered.” It is in this way that I was meaning.

ABT: What does the future look like for Canada’s environment?

Pannozzo: I devoted a chapter of the book to looking at—or taking stock—of Canada’s ecosystems. Using the most recent data available to me at the time of writing, Canada’s biomes—forests, grasslands, wetlands, lakes and rivers, coastal ecosystems, marine, and ice across biomes—were in a state of decline. A key message I wanted to impart is that ecosystems have critical thresholds and when these are reached it’s often extremely difficult, if not impossible, to recover. A well-known Maritime example of this is the collapse of the Atlantic cod—a fish population that has not recovered despite a significant reduction in fishing pressure. Indeed, the situation is similar for depleted fish stocks worldwide. The studies indicate that if decisive action at reducing fishing pressure on depleted stocks is taken in a timely manner, stocks can rebound. Nature is a resilient thing, particularly when it is biodiverse. However, if decisive action is not taken—which seems to be the case here in Canada on any number of fronts—recovery is unlikely.

The future doesn’t look very bright as long as we ignore these critical thresholds. But if we act as soon as we detect the ecosystem decline, before the threshold has been crossed, then we might be able to avert further loss. It all comes back to that notion of reciprocity. Restoring land and water is a big part of what we should be focusing on.

ABT: What do you want your readers to take away from the book?

Pannozzo: I hope it helps to show how individual actions, like changing light bulbs and recycling, are just not enough to address the scope of environmental degradation occurring today. The problem is structural and requires a collective, all-hands-on-deck approach. Ultimately we need to rethink our relationship with the natural world, because it is this deep, underlying relationship that is at the root of the problems we currently face. We also have to transcend industrial capitalism, which is rooted in the mantra of free markets and unlimited growth. The dominant worldview that informs this exploitive relationship is also what is underpinning our legal system—one that views nature as property and lacking any inherent value. So ultimately our legal system also has to change to reflect this. Communities need to be able to use the legal system to achieve real environmental and economic sustainability, something that is very difficult to achieve right now.

I also want people to take away that Canada needs a new narrative that is informed by its first peoples and the values and worldview their societies held and continue to hold as a model to help point the way forward.

ABT: What will you be doing for this Earth Day?

Pannozzo: I try to do what I can, when I can, to reduce my ecological footprint and I try to do that every day, not just on Earth Day. But this question raises a crucial point: the choices we make as individuals are dependent on so many things including the infrastructure available to us. For instance, is there public transit available to me? Are there renewable and affordable energy sources to heat my home? Raising awareness is a good thing, and if Earth Day does that, then that’s good. But I do have a beef with how it promotes small individual actions rather than the large-scale change required for us to live within the means of one planet. In short, when Earth Day starts promoting that we need to turn this rotten system on its head, I’ll really start celebrating it.