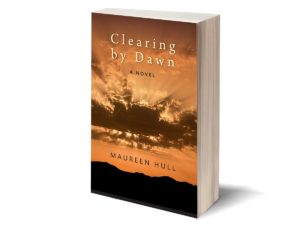 Recently, an acquaintance of mine stayed home from work one morning because she wasn’t feeling well. Later that day, her husband found her in their bed. She had died in her sleep at the age of 56. Her death, a shock to family, friends and co-workers, caused even those of us who didn’t know her well to raise our heads from quotidian concerns and remember apprehensively that life is fragile and unpredictable and that loved ones can be snatched away without a moment’s notice.

Maureen Hull’s latest novel, Clearing by Dawn, is a warts-and-all examination of life’s assured uncertainties. Miranda Murray is a fisherwoman who works alongside her husband Trip. She has two children and a neighbour’s daughter she has taken under her wing, parents, a mother-in-law and many friends. She loves, fights with and frets about them all. The years are going by too fast for her. She’s afraid things will always be as they are, while she also fears the changes to come. She worries about Trip falling overboard, her children growing up and her parents dying. She cringes under her own vulnerabilities and braces for calamity.

Miranda’s fears of an unexpected tragedy are exacerbated, one day, by existential questioning when she and Trip are out fishing. Afterward she exclaims, “It’s not like I’m waiting for another shoe to drop. There’s a whole warehouse up there, crammed full of boots and shoes and they’re just going to keep dropping and dropping.” When Trip, in an attempt to reassure her, says, “good things also happen by accident,” Miranda, unable to recognize her own strength and resilience, exclaims, “I can’t take much more of it.”

Miranda’s angst is believable, as are the behaviours and motives of all of the book’s characters. And Hull has the dialogue down pat: her characters talk to each other as real people do, Maritimers in particular. Also impressive but difficult to describe is Hull’s ability, at times, to write in shorthand. That is, even through she does not explain the background of certain scenes or memories readers, nonetheless, are able to know and understand their context and meaning. Our minds fill in the blanks because we have shared the same experiences or had the same thoughts. It’s an enviable talent, and makes her writing refreshing.

One minor criticism is the book’s chronology. Scenes move back and forth through time, and it’s sometimes difficult to tell just where Miranda is in her journey.

Hull describes perfectly the hurly-burly of a life with kids: the rooms filled with toys and clutter, the unfinished house renovations and the testiness caused by co-habitation. She also brings to life the messy, smelly, dangerous work of those who sail out on the waters to earn their living.

Cleaning by Dawn is a study of the inevitability of life and death and the things in between. It draws attention to the fact that life itself, ultimately, does continue, if not for us as individuals, that it ebbs and flows and that it’s up to us to make the most of it while we can.