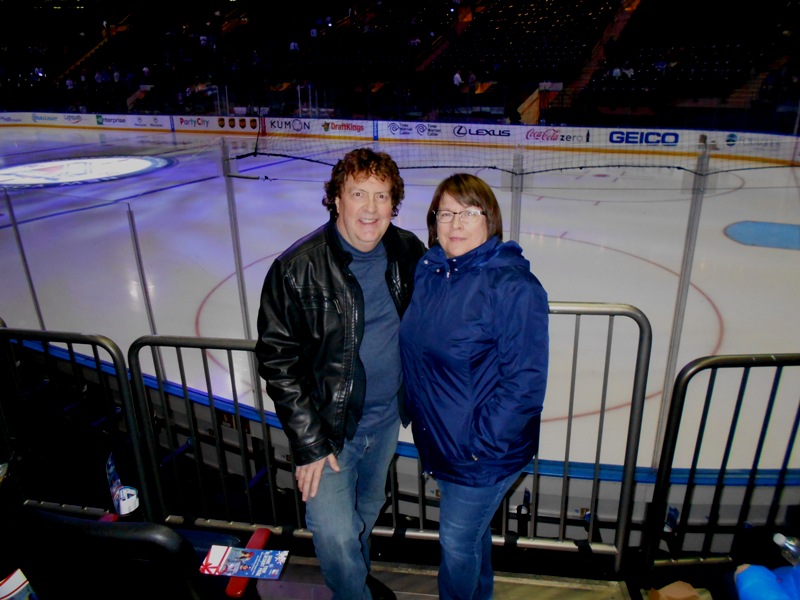 Twenty years after Christopher Meuse published Dear Don Cherry, Does Hockey Love Kids? with Nimbus Publishing, he produced the second edition of the same book but titled it Hockey, Kids & Positive Coaching. The back cover states that this book is “An inspiring tale about a young boy whose love for the game of hockey is affected by the pressures placed upon him by the adults closest to him. It demonstrates the value of love and how a child’s growth and development are enhanced when guided by people who are more concerned about feelings of self-worth than numbers on a scoreboard.”

This message is timeless—and as important today as it was 20 years ago. Sandra Phinney had the pleasure of interviewing Christopher about the second edition for Atlantic Books Today. 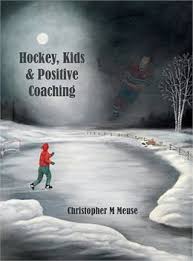 Atlantic Books Today: The book first came out in 1996 with Nimbus Publishing titled Dear Don Cherry, Does Hockey Love Kids? Why did you change the title, and did you make other changes?

Christopher Meuse: I changed the title of the book because I felt it might be erroneously perceived by my readers that I was making a negative statement regarding minor-hockey organization. Most parents and coaches are doing great things with minor-hockey players. My intent was to offer suggestions that might help improve the minor-hockey experience for parents, coaches and especially the kids. Also, people involved in the promotion of the book tended to focus on Don Cherry and he did not want this to happen. As he stated to me: “…it is a great book, you don’t need me for the hype. I’m just the icing on the cake or Cherry on the sundae as they say.” Don Cherry was always very supportive and treated me with great kindness!

I also made a few slight changes to the text, changed all of the illustrations, added an introduction and one extra chapter, all of which helped to explain the theory regarding child and human development told through Michael’s experience in the story.

ABT: Is your story about the young boy, Michael, purely fictional or true about yourself as a youngster (or a composite of children you have coached?)

Meuse: Michael’s experiences in the story are based on scenes that I witnessed as a parent and coach in some minor-hockey arenas. However, there is little doubt that the emotions that were triggered in me during some hockey games were deep-rooted personal issues that I had experienced as a child and teenager … issues related to feelings of low self-worth. It is my belief that human growth and development is enhanced when guided by those who are more concerned about feelings of self-worth than numbers on a scoreboard.

The value of developing a strong sense of self-worth cannot be over-emphasized.

The purpose of Hockey, Kids & Positive Coaching is my humble attempt to explain how the application of empathic listening, understanding and compassion can help parents achieve greater positive results in guiding their children on their journey through life. The power of an education based on true empathic listening and loving kindness can produce worthy outcomes. 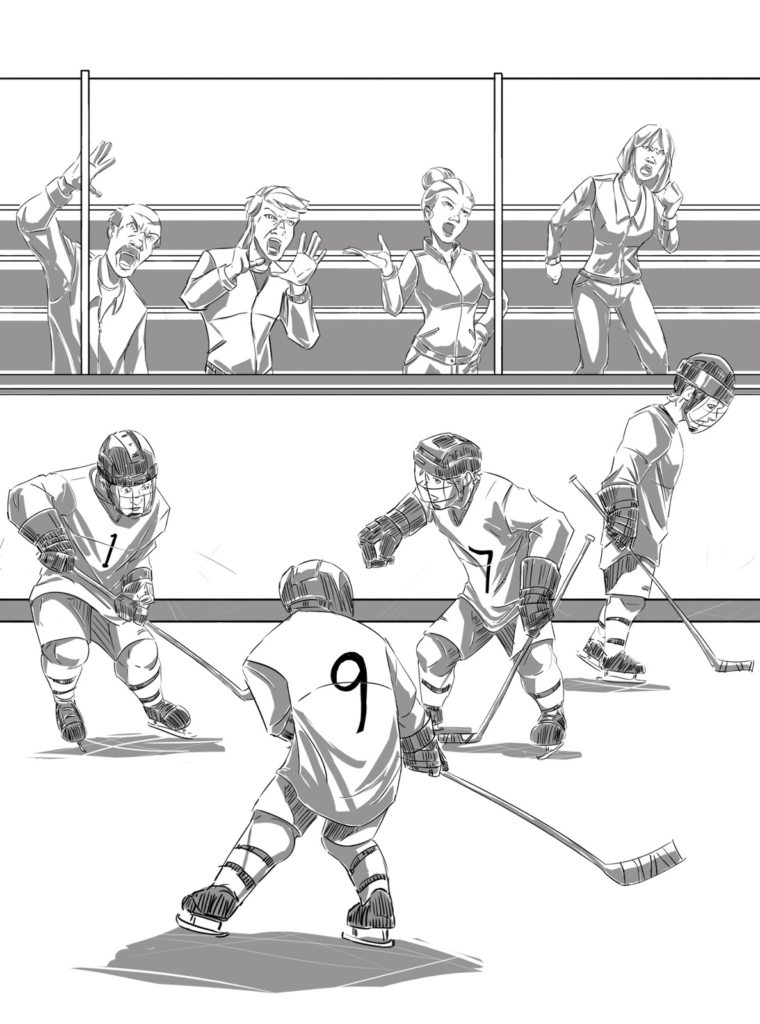 ABT: Including a letter from Don Cherry in the body of the story is wonderful. How did he get involved and why?

Meuse: While following an Anthony Robbins “Personal Power” motivational program back in 1996, I was asked by the instructor to write a list of 20 future goals that might seem impossible to accomplish. So I placed the notion of writing a book on my list. Approximately two days later I woke up in the middle of the night with the urge to write! By morning I had written the rough draft of the book.

While writing the section dealing with Michael’s feelings of low self-esteem, Don Cherry’s name came to mind. I had watched Hockey Night in Canada’s Coach’s Corner on many occasions and had often heard Don speak about treating children with respect and dignity [so] it seemed a good idea that in the story Michael could write to Don Cherry asking for suggestions as to how he could deal with his parents.

I faxed Don Cherry with the request, which he politely turned down. Undaunted, I mailed a portion of the manuscript to him. He liked what he read and sent me his own reply to Michael.

In an interview by Brian Medel in 1996 for the Chronicle Herald, Don Cherry stated: “I’ve seen hockey books before, but I’ve never seen one like this that hits the mark as good as his. I get about 9,000 offers to be in books and stuff like that and I usually turn them down, but with this one I liked it so well, I said, ‘Let’s go!’”

Don Cherry and I continued to communicate via fax, emails and several hand-written letters. I have never personally met him but I admire and respect him.

ABT: Would love to get a sense for the life of this book over the past 20 years. How do you see the life of the book unfolding from its inception way back when to now (and beyond)?

Meuse: When the book was first released in 1996 it sold approximately 2,000 copies. There was very little promotion and it was taken off the market after about two years. It wasn’t promoted again until I released the second edition in October 2016. Since its release it has been receiving a fair amount of positive publicity in newspapers and websites throughout Canada and the United States and on local radio. However, book sales are still low.

ABT: For the second edition, you decided to self-publish. Even though it’s been less than a year, what has the experience been like?

Meuse: This time around I decided to form my own publishing company, Lofeex Publishing. I self-published the book and conducted my own marketing strategies. Dan MacKinnon did all the inside illustrations. I learned about Dan from Richard Rogers, of Glen Margaret Publishing, who supplied a leadership role. The cover design and painting was done by my uncle, Glen Henshaw. Brenda Conroy helped with the editing and design.

Although it is very time-intensive, I truly enjoy the whole process. I have total creative freedom and I have connected with many interesting individuals and groups who are involved in coaching, sports psychology and parenting organizations.

ABT: What has the response been to your book?

Meuse: I have received positive feedback from many parents whose children are having negative experiences in sports. One of the most rewarding messages I received came from a parent who informed me that her son, who was having self-esteem issues, brought my book to school for his teacher to read to the class. It brings me great joy to know that my book brought a positive light into his life.

ABT: Now that you are retired from teaching—aside from hockey—what are your interests and hobbies? Do you have a bucket list?

Meuse: I am contemplating writing a much more in-depth novel in which I will attempt to explain my theories, experiences and philosophies through the lives of the characters, on how we can live happy fulfilled lives. I would also like to counsel individuals who might be experiencing mental health issues.

As soon as promotion and distribution of my book is complete, I would also like to do volunteer work in hospitals. I have recently started to play my bass guitar again with the hope of reuniting with musician friends from the past. My wife, Peggy, and I have always hoped to visit Ireland, Scotland and England at some point in our lives—part of my bucket list.

Meuse: Several years ago I was listening to an interview with the renowned basketball coach, John Wooden. The host introduced him as “a coach of love” who cared more about his players as individuals than he did about them as basketball players. (At the time of the interview, Wooden’s teams won more consecutive games and conferences than any other team in US basketball history.)

Wooden believed that any percentage of energy that is used to focus on the thought of winning, or on scoreboards, or referees, et cetera is energy removed from one’s ability to play one’s best. Wooden emphasized intrinsic motivation focused on one’s desire to play his\her best. If they played their best then they were winners, despite what the scoreboard indicated.

In my very idealistic, head-in-the-clouds world, I am realizing more every day this truth that I knew as a child: The many powerful forces of hatred, anger and fear will one day be silenced by the one energy more powerful than all negative forces combined—the spirit and energy of love.