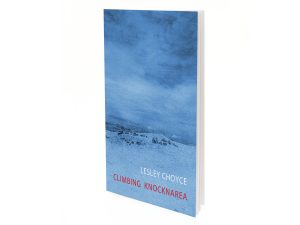 As the back cover notes, this is Lesley Choyce’s 92nd book. The Nova Scotia-based poet and novelist has engaged in a multi-faceted career and runs Pottersfield Press. Climbing Knocknarea, his latest book, includes 52 poems.

They cover a lot of scenic ground. Much of this is a kind of travelogue—including the titular piece (in Ireland, 2015), where on gaining the top “The wind now roars a kind of applause”—or drinking a pint in “Yeats Tavern,” musing:

Or waiting to take flight at Philadelphia International Airport, where a fellow commuter reads Beekeeping in Indiana. Choyce also makes travel notes of his life, with references to checkpoints in long relationships and his own biography. In “Skateboarding in New Jersey, 1967” he

was a boy
and did not fully believe
in gravity yet.

In “Edible Wild Plants” he has swapped forage for store-bought convenience and writes:

I apologize to the setting sun
for the pragmatic many I have become.

There are some sharp, vivid turns, but there is also much quotidian observing formatted by workaday line breaks. And there are a lot of poems about writing poems, i.e. “The Last Line of the Poem,” which is “a real bastard.” Choyce asks, what is “the Poet in the Twenty-First Century?” declares “the poet dreams in verbs,” describes the process of a “Poem Written With My Left Hand”:

Reinforcing his tenet that any situation can be refigured into verse, Choyce includes “Poem Written While Stopped For Speeding”:

…It wasn’t just me officer,
everything is moving too fast: the spinning planet, the sun itself racing away
from the centre of the universe,
because the stars all love velocity
and I’m just trying to catch up.