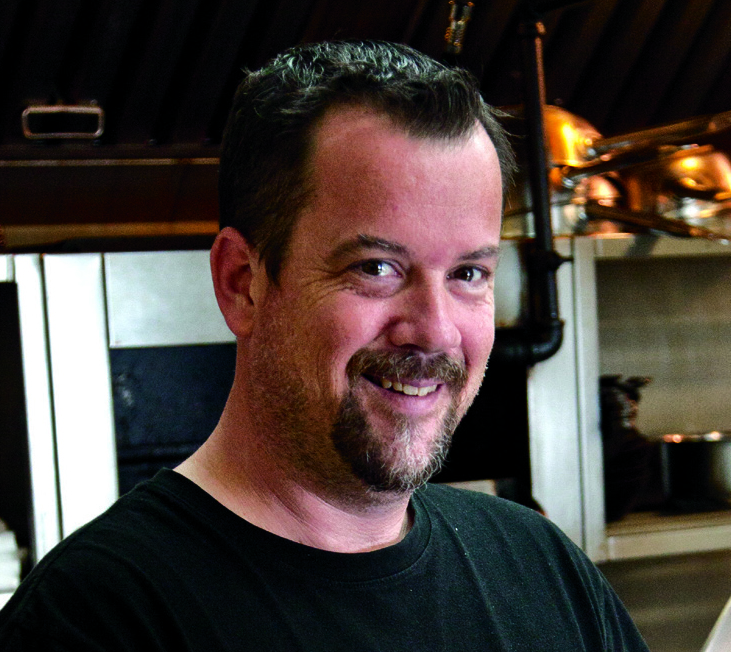 Chef Lynch often he’d never write a cookbook, but when the right publisher came along he knew it was time to craft a book that connects home cooks with local ingredients

Jason Lynch’s book is called Straight From The Line: Recipes and Reflections From a Chef at Work (Able Sense Publishing), but it could easily be called “Straight From The Hip”, thanks to his straightforward style. The book opens with an essay by Lynch, explaining his ideas on what matters to him when it comes to cooking. Atlantic Books Today caught up with Lynch to ask him about how writing a cookbook can change perceptions, from the chef/author, to the public.

Tell me how this book came to be.

A couple years ago, I was approached by a couple publishers, but I said no. I didn’t want to do a cookbook because growing up on a farm, and supporting local suppliers, I didn’t want to have a book shipped off in Asia to be printed, and not have any say on editing, and all that. Able Sense Publishing popped up and asked if I would be willing to do a book, and I told them what I needed and they agreed. 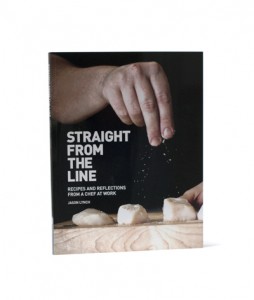 The first thing you say in your book is that you’d “been reluctant to do a cookbook.”  Has your opinion changed now that you’ve written one?

I think the landscape for cookbooks has changed from where it was when I started out 20 years ago. Now it is driven by the big publishing houses and unless you fall within their model it is hard to put out a cookbook that you have control over. At the end of the day, the game is to sell a book. So there are things they want and you have to follow their formula. I buy a lot [of cookbooks], and they’re garbage. They’re not tested, nor do they relate to the average individual.

A lot of cookbooks these days are focusing on the idea of food as much as its execution. Your book starts off not with recipes, but with ideas: ideas on how to cook, when, with what.  Was this your idea or your publisher’s?

It was mine. I thought it important to show people some of the things I have learned over the years. I need to talk about actual cooking and how to evaluate and use a cookbook. That’s the way we teach in restaurant kitchens, but no one talks about that in a cookbook, which is unfortunate. They tell you, “you have to follow this recipe,”and most of the time it doesn’t work properly. Why not talk about substitution? That’s how chefs make their living. We are taught the classics, then tear them apart and make our own.

Did having to put down into words, let alone in a public fashion, your ideas, theories, and ethics around food make you think hard about why you do what you do?

It did. Luckily the editor I had was fantastic and was able to help me with a lot of that. Being verbal is a lot easier than writing, that’s not what I do, and I think a lot of chefs fall into that category. I had someone who understood that, even though I did struggle with it. It’s a fine line to walk.

It used to be rare to have a chef write a cookbook. It was written by cooking professionals, mostly teachers. Chefs have a shorthand that lives among them. Did you find it hard to have to explain that shorthand, over and over again?

I certainly did. There were spots in the cookbook where I didn’t explain enough, but I did try to keep it simple and use few ingredients for that very reason. It was a challenge at times. But I feel like I didn’t write a cookbook, more of a combination cookbook and general thoughts around cooking and procurement. A lot of people aren’t connected to where their food comes from.

Did people treat you, or your ideas about food, differently after your book was published?

There are certain people who think that if you’re able to publish a book, you’re not really cooking anymore. You’re not behind the line. That’s not true for me.

I guess the only thing is that it’s hard for a lot of people to understand how books come to be. Some books aren’t written by chefs at all, they are put together for them. But some chefs take a lot of time and effort, to do it.

[With a book], you also open up to people who wouldn’t know your cooking. It did give me more exposure. The book sold better than I expected, especially in the way we went out doing it. We stuck with small independent stores, and away from large stores as much as possible.

Did writing this book change who you are as a chef?

It was a two-year process, and since I was in the kitchen every day, it was a lot of work. It made me even more passionate about what I do. In a sense it reminded me of what I do, and why. It cemented for me that I do have a lot of pride in what I do. I am not using what I talk about in the book as a marketing idea, I live it. It helped galvanize that for me. It just made me more passionate.

Top image: Citrus Crusted Scallops from Straight From the Line