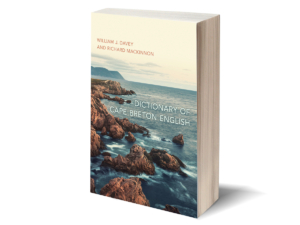 It may seem odd to suggest a dictionary is a fun read, but the Dictionary of Cape Breton English (DCBE) by academics William J. Davey and Richard MacKinnon is just such a book.

Islanders – whether they live on Cape Breton, PEI, Newfoundland, Ireland or elsewhere – have a strong local dialect, which seems so much more colourful than that spoken, written and employed by mainlanders. It’s as if language, for an island resident, is not merely a means of communications, but a form of entertainment. The DCBE serves a dual purpose of dictionary-cum-social history in that it’s a snapshot of Island life and Islanders.

The authors’ lengthy – and interesting – introduction references a surprising number of themed, geographic-specific dictionaries. Perhaps it was the recent elevation of Mother Theresa to sainthood, but reading their “criteria for inclusion” seemed something akin to linguistic beatification. For a word or phrase to rate inclusion it had to have multiple sources, as well as agreed to meaning(s).

One can imagine Cape Bretoners (aka ‘Caper’, page 32, which we all knew) scouring the pages, agreeing with many descriptions, while also searching for words and phrases that may have been excluded or overlooked. For those who may be away or, sadly, never-been, this is an insight to a place, people, culture and economy. It is surprising how many words and phrases come from industry, whether mining or fishing.

There are draegermen (also spelled dragermen), who are mine rescuers. Theirs is a role many of us were sadly introduced to during the Westray catastrophe. We learn that a “double house” was “a company owned duplex” at a time when everyone knew which company. We also learn that duff is a small piece of coal, and tally, is pretty much what we assume – a count, but in Cape Breton it’s a metal tag attached to a loaded coal box so credit goes to the correct miner.

Among the domestic descriptions are Fat Archie (a soft molasses cookie also known as a Long John), Gansey (a heavy, homemade sweater), keeler (shallow wooden dish to hold milk), and Krim-ko (also krimco, crimco, which is chocolate milk). We learn that a plum loaf is raisin bread and quirtal is “a variable unit of measure, typically for codfish.”

Most Atlantic Canadians don’t need a dictionary to explain “rum sick,” which in some places is also known as the “40 oz. flu.” But there are delicious new words, like gomach (a foolish or stupid person), which makes it easy to say to a stranger, “You’re a right gomach aren’t you?” Another is stepmother’s and mother-in-law’s breath, which is a draught or cold weather. Basically, something unwelcome. And then there’s a sugar tit (a baby’s soother made by tying sugar in a cloth), which illustrates domestic ingenuity and thrift.

This is a dictionary to both explain words and share ways of life which may not be in evidence now, but which still influence the place and people.

This should appeal to word lovers, writers, social historians and the curious. It would also be a great gift for Scrabble players anywhere.