Can’t Get Any Crazier? 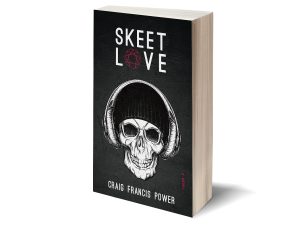 They came for us in the night.

We didn’t know at first, but they were there.

The three of us dreaming in bed with the sounds of the traffic and the all-night convenience store right there on the corner, and the dive bars down the way, and the drunks.

They came for us first in our dreams—barely noticeable—a shadow within a shadow in the corner of a dreamed room; the trunk of a car.

At last, we could feel them in our bones and in the beating of our blood.

And I still don’t know where it all started.

But it had something to do with the Painting Game.

The Painting Game, Shane’s dad, the Radio Room, and the war.

They’re tied together somehow—and then everything came to an end.

And that had to do with me.

I came a long way to find what my life meant, you know?

From the bars and the back alleys of The Metropolis to the tenements of T Dot to the cliffs and the hills of the 7-0-9—sometimes I thought I’d never make it.

But I found what I was supposed to do.

It was like the seed of a flower inside me.

And the seed of that flower was a flame stretching up into the heavens that would never die.

That’s what I am.

And this is how it happened.

One day the satellite plunged into Lake Sludge.

Shane, Nina, and Brit watching the shaky video footage on the news.

A black cylinder, glinting darkly in the light, dropping out of blue sky.

An enormous splash. Debris flying up. Shock waves in the water.

It replayed over and over again, the angle of the satellite in mid-fall suggesting some terrible consequence.

They’re in the car now, but will never be safe.

The three of them knowing they just have to keep moving.

And Carter, poor little Carter, with his PTSD.

The man at the toll beside the ferry terminal watching as they pass.

It actually made them feel good to see a person behind the glass.

The black smoke from the ferry’s chimney hangs in the air above them.

They blow by a hitcher on the gravel shoulder of the highway.

We’re ahead of you fucking dumb shits, but also, we ain’t.

But we are your world.

This here is your world.

Don’t care what you say:

This is your world.

He’ll rap only in front of the mirror at home, a straight-up genius, thinks Nina, legit.

Skeet Love, Shane says, that’s like, Rock, yo. Like where my dad is. That’s a fucking Rock term and that’s me, so fuck you.

Know what that shit means?

And there ain’t nothing that makes you smarter than being shit.

Someone who’s up to no good.

A total outsider, like every damn day of my life.

So whatever, and anyway, like I said, Fuck you.

Nina and Brit checking his flow.

His hands, the cut of his shoulders.

At first, Brit was only around occasionally, now she’s here all hours.

When she met them, Brit was on top of the moon.

That’s sometimes the way she talks when she’s excited—she mixes shit up.

Shit is always getting mixed up—totally—like your world and this world.

It’s messy, man—like where does one start and the other one end?

Or do they even?

Nina and Brit and hours and hours on karmaloop, lookbook.

Nina’s got the best clothes, Shane the best drugs.

The two girls changing outfits while Shane paces and smokes, flexing his trophied lats in the bedside wall mirror—this world, and that man, like legit.

Shane’s like, Know how many crunches I can do, motherfucker? Well neither do I cause I lose count after a thousand. Chin ups? Whatever. This body is tight, yo, like tight as shit, like a virgin—for real.

He’s old school, thinks Brit, sells pills for five bucks a pop when everyone else is into powder.

They go to a club, the dance floor crazy, Brit and Nina making out for the crowd while Shane leans at the bar sipping a cooler.

He hates beer, has a gluten intolerance.

Nina once said, Shit, you’re so skinny, baby, it’s hot. I wish I was sick. I wish I had cancer.

She pictures herself, like him, with her ribs showing through. She could kill anything with ribs like that. She could destroy the universe if she were that thin, her knee bones knocking together painfully in bed.

She sees herself emaciated, grinning.

She winks and the skyline is flattened.

Waves her hand and all the buildings utterly devastated.

Blackened bodies, ash on the wind.

Drop another twenty pounds and you’re the shit, she thinks, she smiles.

In the club, she screams over the music:

Brit smiles back at her. The vamp fangs she bought online glow in the black-light.

When Shane first saw them, he was like, Keep that mouth away from my dick.

But not really. Really, he was totally down.

Brit’s fangs—they’re good for a week and then fall off—two white little talons, like bullets.

Brit’s a poet—the fucking legislator of the wound is what she told Shane and Nina when they first met.

Nina and Brit coming off the dance floor covered in sweat.

Shane thinking how everyone in the club, every eye in every head, is watching them.

They rent bikes from a Thai kid outside and peel through the streets, neon blinding them.

If there’s anyone following them, they ain’t anymore.

Not yet, Nina thinks, wanting to vomit. They come to a park and throw the bikes to the ground.

Sprawled on the grass. Trying to see stars through the smog above their heads.

You guys are my family, Brit says, her eyes huge in the dark. I feel like I’m home.

Sour Puss and grenadine, a puddle of blood.

Brit says, Take the in out, and you’ve got a grenade.

On the train home, Nina with her head on Shane’s lap, KO’d.

Shane watching the other passengers.

Dude in a suit with his eyes all over Nina’s body.

Another looks at them over the top of his newspaper.

They get off two stops early, Shane carrying Nina, and Brit trailing behind.

Later, Brit watches the two others sleep on the mattress. She meant what she said. The sun is up, Monday morning traffic on the street. A fan by the bed blows strands of Nina’s hair into the air.

She pops another of Shane’s pills. Red Butterfly. When they wake up that afternoon, they find her on the fire escape cross-legged. Her eyes as shiny as a polished gun barrel.

Soon, Leo will get out of prison, and when he does, he’ll come looking for Nina.

She belonged to him, but now she belongs to Shane.

She puts her nose behind Shane’s ear and says, You own me, baby, you own me.

She snuggles closer to him in bed.

The thing he does when his fingers are in her hair is that first he smooths it all down—almost like he’s petting a dog or a cat, and then his hand comes down over the curve of the back of her head, and with her hair in his hand, he sort of clenches his hand very gently and tenderly into a fist, and then releases her hair and smooths the back of her neck.

Then he’ll tuck some loose strand of hair behind her ear, and he’ll kinda cup the spot where her jaw and neck connect—kinda right where her earlobe is.

Then he’ll caress her earlobe between his thumb and forefinger, and run his hand down her neck until his warm palm meets her collarbone—and then he’ll do the same thing again, and again.

You wouldn’t think someone like him could be that way—so sweet—but he is.

And when he’s like this with her, she worries he isn’t brutal enough for the world or something, but maybe he is brutal enough—and anyway, maybe it’s not something she needs to worry about.

A phone call will come and it’ll go like this:

This is Dr Dre. You a fuckin’ genius.

ODB came back from the dead for this shit. I played him yo demo.

But first Shane will make a demo.

But before that, Shane will win a million rap battles.

And there’s Nina stage left, watching him embarrass the fuck out of each and every comer.

Shane will make it, and Nina will wear a white faux-fur bolero jacket, a black mini with thigh-high black boots, and her eyes will burn from the camera flashes.

But really, Nina knows, a phone call will come like this:

This is Leo. Imma fuckin’ shoot you dead.

Craig Francis Power is an artist and writer from St. John's. His first novel, Blood Relatives, won the Percy Janes First Novel Award, the Fresh Fish Award for Emerging Writers, the ReLit Award, and was short-listed for the BMO Winterset Award.