The latest addition to McGill-Queen’s History of Religion series 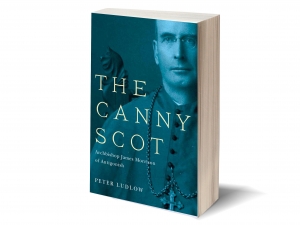 Archbishop James Morrison of Antigonish (1861–1950) was one of Canada’s last ascetic and powerful churchmen. Historian Peter Ludlow’s The Canny Scot, the latest addition to the McGill-Queen’s Studies in the History of Religion series, is Morrison’s biography. In addition to examining Morrison’s personality, Ludlow also considers his tarnished legacy in relation to the internationally lauded Antigonish Movement, which he helped to create.

Ludlow does an excellent job of situating Morrison within his time and place. Today we forget the threat of communism, the viciousness of coal miners’ strikes, the thinness of the social safety net. A biography is only as strong, however, as the information the writer is able to glean. Ludlow is a fine researcher and a clear writer, but the lack of personal letters and papers, especially from Morrison’s early years, keeps us from knowing the man as well as we might.