Canada’s Bastions of Empire: Halifax Victoria and the Royal Navy 1749-1918 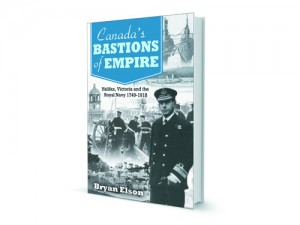 Now in the early days of August 1914 a drama affecting the lives of thousands of civilians was unfolding in the northwest Atlantic.

As the international crisis deepened, Americans desperate to get out of Europe crowded liners departing from continental ports. When she sailed from Liverpool at 4:55 p.m. on August 1, bound for New York, Mauretania was carrying 235 extra passengers. Hundreds more would-be passengers were left on the dock.

On this voyage her captain poured on the speed, averaging six hundred miles a day until fog forced a reduction. On August 4 news that war had broken out was received. To avoid needless alarm Captain James Charles, Royal Naval Reserve, chose to keep the news to himself, but as a precaution portholes were darkened and lights dimmed. Off Sable Island at 11:30 p.m. on August 5 His Majesty’s Ship Essex broadcast a general message to British shipping in the Sable Island area: “Change your course, full speed for Halifax.” This was followed by a warning of the German raider Dresden. (Had Mauretania been intercepted the German captain would have faced a dilemma. Being unable to send her with a prize crew to a friendly port, as required by international law, he would have been obliged to sink her, hopefully after allowing passengers and crew to abandon ship.)

Halifax was 140 miles away. Despite the fog, full speed was again rung on, and a violent course alteration was made to the northwest, directly into the sea, during which the third-class accommodation on the shelter deck was nearly flooded. The darkened Mauretania raced for safety at twenty-eight knots, spray breaking over the bridge, as her boilers generated seventy thousand shaft horsepower, two thousand more than designed. (Her chief engineer later said, “We could have gotten another knot out of her.”) Wireless silence was imposed, preventing the dispatch of passenger telegrams, thus adding to the passenger’s stress caused by the course alteration. The stress would have been even greater had they not still been ignorant that war had actually broken out. First-class passengers gathered in the saloon and joined in singing “God Save the King.” Among them was a group supposed to be German citizens, but according to a ship’s officer who was present, they “chipped in and sang enthusiastically with the others.”

The New York-bound White Star liner Cedric had also picked up the warning; she and her 868 passengers also steamed at top speed for the safety of Halifax.

Mauretania anchored in Halifax harbour at 10:40 on the sixth, in bright sunshine. Large numbers of spectators crowded the waterfront to view the famous and beautiful ship. Later in the afternoon Cedric entered the port, escorted by Essex. The cruiser proceeded at once to the dockyard where she coaled for two hours before hastening to sea again. As she passed cheer after cheer arose from the shore and from the passengers and crews of the two liners. Some percipient spectators may have realized that the incident signalled the re-emergence of Halifax as the key to the Royal Navy’s operations in the northwest Atlantic.

The captain of Essex had ordered Mauretania to remain in port for five days, while a search went on for guns with which to fit her out in her designed role as an armed merchant cruiser. Numerous craft, including the Dartmouth ferry, were employed in disembarking the passengers to the downtown immigration shed. From there they were taken to the old North Station on North Street, continuing to New York on special trains chartered by the Cunard line. The only exceptions were Germans and Austrians who had not taken out American citizenship. Twenty-three Germans were detained in the Halifax citadel. The British Empire was still at peace with Austria-Hungary, but passengers of that country continued to be watched.

The only 6-inch guns available were needed to rearm Niobe, so Mauretania sailed unarmed for Britain for her conversion. But this would not be the last time during the war that Halifax would see the famous vessel, albeit in a different guise.

On the ninth three German-chartered colliers were reported to have left New York, probably in support of Karlsruhe and Dresden, while a fourth was said to be off Cape Race. The lighthouse at lonely St. Paul Island in the Cabot Strait advised that a warship claiming to be British was loitering in the vicinity, but had asked that its position not be reported. This might have been Essex, but as a precaution Naval Service Headquarters ordered all shipping at Montreal, Quebec, and Sydney to be held until the uncertainty was resolved. The Admiralty rebuked the Canadian authorities for this precipitate action, saying it amounted to doing the enemy’s work for him, and sailings were quickly resumed.

Cradock was ordered to shift his flag from Suffolk to the larger armoured cruiser Good Hope, which had sailed from Britain to the Western Atlantic. Baffled in his attempt on Karlsruhe, he proceeded north for the rendezvous. En route he received intelligence that Karlsruhe was at Puerto Rico and Dresden off the mouth of the Amazon. While passing New York he so advised the British Consul General. This information was reported in the New York Times. Transtlantic trade soon began to flow at its normal volume. Cradock could have coaled at New York, but under neutrality laws doing so would have meant that he could not use an American port again for three months. Better to save the option for a real emergency.

Late on August 13 Suffolk arrived in Halifax and immediately coaled, with the assistance of men of the Halifax Rifles who worked enthusiastically at this filthy and back-breaking task. It is not clear whether Good Hope should already have arrived; in any case she was not there. Unable to wait, Cradock sailed at once, intending to rendezvous at sea for the turnover.

On the outbreak of war all Royal Canadian Navy personnel had been recalled from leave, midshipmen Malcolm Cann of Yarmouth; John Hatheway of Fredericton; and William Palmer, Arthur Silver, John Grant, G.C. Jones, and J.E.W. Oland, all of Halifax, reporting on board Niobe. Grant had gone to Sydney as part of the emergency naval brigade. Once they were aboard, they found little to do in a ship that almost from a standing start was struggling to become combat-ready. Thirsting for action, and with Niobe jetty-bound, all seven quickly volunteered to join Suffolk. They were officially appointed, and managed to get aboard just before she sailed; a classic “pier-head jump.”

Their departure was headlined in the Halifax Herald: Brave Halifax Lads Eager to Strike for Canada and the Empire. Despite the bustle of mobilization, the reality of war had yet to hit home. The article noted, “Halifax will look forward to their visits to this port throughout the duration of the war,” almost as though they were sailing on a pleasure cruise. A few months later such sentiments would be extinguished in the carnage of the trenches.
——–
On Saturday August 15 Good Hope arrived, and, according to the Herald, sailed on the same day, only half-coaled, hastening to overtake Suffolk for the change of flag. An older vessel, Good Hope had been brought out of reserve and hurriedly prepared for her mission, and because of a clerical error was four short of her established complement of midshipmen. The shortfall was to be made up from the Canadian midshipmen on board Suffolk. Naturally all seven volunteered. Admiral Cradock personally asked for William Palmer, who had been first in his graduating class, and for Arthur Silver, who had been the senior cadet captain. The other two were chosen by lot. The names of Malcolm Cann and Victor Hatheway were drawn. Service in a larger and more powerful vessel, and a flagship at that, was a step up, and the three not selected would have been bitterly disappointed. But within six weeks their much-envied comrades would be dead.

In the few days they were aboard Suffolk a very busy Admiral Cradock could not have learned enough about the Canadians to make an informed selection. But the mids had done their sea training in Berwick, Cradock’s flagship on the Mexican station in the autumn of 1913. He had always taken a great interest in
junior officer training and made a habit of associating with the men on an informal basis. No doubt he now made his choices on the basis of considerable observation during that period.

The four appointments to Good Hope were dated August 17, 1914. The two ships met at sea, and the Admiral, his dog, his small staff, and the four midshipmen were transferred by boat. In the course of the evolution an irreplaceable Chinese vase that was the admiral’s only valuable possession was accidentally broken. Captain Philip Francklin of Suffolk also exchanged places with the captain of Good Hope, so Admiral Cradock could continue to work with a flag captain he had come to know and trust.

The mids found themselves in their third ship in just two weeks: Niobe, Suffolk, and now Good Hope. Life on board was a far cry from the peacetime conditions to which they had been accustomed while under training. They had been warned not to bring any unnecessary items of clothing or personal effects. Like all ships on the outbreak of war, Good Hope had been stripped of her woodwork and furniture; nothing remained to soften the impact of the steel box in which they were enclosed.

In the days before radar and aerial or satellite surveillance the human eye was the only means of detecting an opponent. At night or in poor visibility the first warning might come with the enemy already at perilously close range. In peacetime, the ship’s company was divided into three or even four watches for normal cruising; now they remained constantly at defence stations, with half the crew closed up at their guns during the hours of darkness. Those off watch slept in their clothes for quick response in the event of an alarm. There was no escaping the reality that they were at war and might at any moment be fighting for their lives.

Bryan Elson is a former officer of the Royal Canadian Navy, and the current director of the Canadian Naval Memorial Trust in Halifax, Nova Scotia. He lives in Halifax. This is his first book.