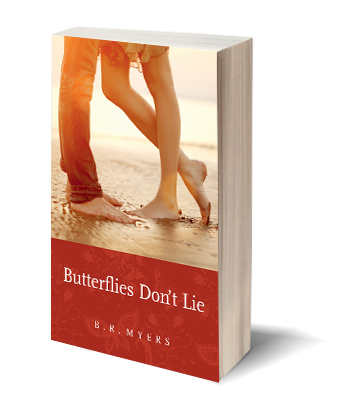 When I arrived to work the next morning, I had a plan. I waited until Mom’s hatchback disappeared up the steep hill with Chet singing in the back seat, fresh from another swimming lesson. He was having an awesome time, but it was obvious to me he probably wasn’t going to pass this level. I meant to talk to Mom about it, but since her lengthy lecture last week on how I needed to take my responsibilities more seriously, we’d only been exchanging a few sentences here and there.

It made me angry sometimes, how she just expected me to pick up and take care of Chet when she decided to take on more work. Wasn’t she the parent? Shouldn’t she be noticing that he needs more help in the pool if he wants to pass? Shouldn’t I be doing more fun teenage stuff instead of working and babysitting my little brother?

This thing with Blaine couldn’t start fast enough. And once he noticed me, I was certain, my real life would begin.

I paused in front of the Queen’s Galley, where a flower delivery truck was in the driveway by the kitchen. A fresh load of guilt knotted my guts. I groaned, imagining all those vases needing to be filled again with real flowers. Julia would be so pissed if she knew I was the reason for all the extra work. She’d never been mean to me, but she had a tough kind of confidence that made me shrink a little bit every time she walked by.

A car blared its horn.

From under the canopy of maple trees, a bicycle zoomed down the hill. The rider was sitting straight up with his arms dangling by his sides. He flashed by me, perfectly comfortable even though a single pebble could jar the handlebars and send him sprawling to the asphalt.

His blue hair peeked out from underneath his helmet. I rested my elbow on the front gate of the picket fence, watching him. The bike slowed down as he got closer. I went over the script in my head, preparing myself, trying to ignore the weird way my stomach was flipping over.

“Hey!” I said to him, motioning to the hill. “You could have died. Don’t you watch Real Life in the ER?”

“No. Should I?” He stopped right in front of me. One foot skidded on the ground, taking all his weight. He took a few deep breaths, his face was red with exertion. I wondered how far he’d biked. Where he lived.

“Well, yeah,” I said. “Or, I mean, at least you’d know the risks if you saw all the banged-up accident victims.”

A bead of sweat started to trickle from his left temple. He blinked back at me, staying quiet, waiting for me to continue. My elbow suddenly felt ridiculous resting on the gate, but I couldn’t move. It would seem totally unnatural to move right now.

“Um…” I started. “For instance, a show from last season had this kid who was biking and he skidded on some gravel and ended up with really bad road rash. Like, all over his face and stuff.”

How-hole’s expression was like stone. The drop of sweat trailed down past the corner of his mouth.

“Yeah, so. Just be careful,” I stared at the handlebars of his bike to further emphasize my point—which by this time I had completely forgotten.

He said, “Maybe I don’t care about my face.” Then a quick grin played on his features, “or my stuff.”

The blush rushed to my ears. I replied with a very dignified snort-laugh followed by an arms-crossed-in-front-of-the-chest manoeuvre, clearly showing him that I was unaffected by his stab at sexual innuendo. “Whatever,” I said, impressed I managed to get out a multisyllabic word. “It’s not my business if you want to show off.” I turned and pushed through the front gate, heading up the flower-lined walkway to the Queen’s Galley.

“And who should I be showing off for?” he called out.

I glanced back. The grin had taken over his whole face. I opened my mouth but no words came out. He only chuckled, then shook his head. He whistled while he locked his bike to the railing of the back kitchen porch.

I kept staring with my mouth hanging open like an idiot.

He caught my glance. But instead of another smirk, he only gave me a nod, then sauntered up the steps and into the kitchen like he owned the place.

“Close your mouth,” Loretta appeared in the front doorway, leaning on one hip. “You look like a broken fountain.” There was a dish towel in her hands. “Shake the lead out, babycakes,” she said. “Lunch starts in ten minutes.” Then she disappeared back into the restaurant.

I looked back at the bike. My burning ears now had their own heartbeat. No. Not How-hole! We were totally wrong for each other. He was NOTHING like Blaine. And according to every quiz I’d ever taken—and my hormones in math class—Blaine was the perfect match for me.

How dare How-hole assume I was flirting! All I was trying to do was be nice and tell him to be more cautious. Nothing overly bizarre or flirtatious about that, right?

“What a how-hole,” I muttered. Like no one else had ever ridden a bike downhill without holding on.

Okay, I never had. But that’s not saying much since I’d never been in the ocean past me knees, either. But at least I knew what kind of guy he was now.

And we all know what happens to girls who hang out with reckless thrill-seekers, right? Yes, road rash and a starring role in an episode of Real Life in the ER. No thanks.

B. R. Myers spent most of her teen years behind the covers of Stephen King, Ray Bradbury, and Lois Duncan. She collects vintage jewelry, appreciates a design in her cappuccino, and believes bacon makes everything better. When she's not putting her characters in awkward situations, she works as a registered nurse. She lives in Halifax, Nova Scotia, with her husband and their two children.