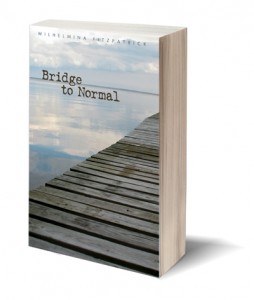 Dad’s funeral business had only been open a few months before I started school and I hadn’t given much thought to it. But that first day when Katie walked home with me, she was full of questions. How many dead bodies had I seen? Did I get to see accident victims? Were their arms and legs ever cut off? How about their heads? Could she come over to my house?

Finally, a question I could answer. “Sure.” Josephine would not be pleased.

“Let’s walk home together every day.” Katie started us off on a skip down the road.

My heart leapt with excitement. I generally played alone in my room, creating stories and plays, acting out all the parts by myself.

“Let’s do everything together, just like sisters but better.” She stopped in mid-skip. “Oh my God, you can marry Seamus. He’s older but that’s okay. Girls are supposed to marry older boys, right? I wish you had an older brother, then I could marry him and we’d be like double sisters. Oh well, we’ll just have to be best friends for now.”

I forgot all about Josephine and dead bodies. Katie was a tomboy with wild red hair and a great deep laugh that seemed too big for her little body. The other kids had been hanging around her all day, but for some reason she wanted me to be her best friend.

“You have to show me your room,” she said. “Best friends have to know everything about each other.”

Katie talked the rest of the way home, about her brothers and sisters, her aunts and cousins, her dog and two cats. I marvelled at how many people there were in her family. Mine consisted of Dad and Josephine and Melinda, who I decided I could count even though at the time she was still working up north, wherever that was. I hadn’t yet met my grandmother. The one time Dad went to visit he went by himself. I didn’t think it right to include her.

“Josephine, I’m home,” I called out when we entered the house.

I heard Katie gasp. The floral sofa, which was fitted with a thick layer of plastic, was covered with dolls, each decked out in either an elaborate wedding gown or a plain black uniform, the brides’ heads covered with veils of stiff lace, the nuns’ faces protruding from black and white plastic habits. Each doll had been positioned to face forward, looking toward the door. Sixteen sets of glass eyes gaped at us.

Josephine, who always had an afternoon nap, thumped down the stairs in her housecoat. “For the love of God, I’m sick of telling you to keep the noise down.” She pointed at Katie. “You’re that Dollmont girl.” Katie turned to stare, speechless, at Josephine, who grunted, “Keep quiet,” and headed back upstairs.

Katie grabbed my arm. “How come you got so many dolls?”

She moved towards the dolls. “What does she want dolls for?”

I followed close behind. “She makes them and sells them.” As Katie reached out, I stepped in front of her. “We’re not allowed to touch them.”

Katie laughed and tried to go around me.

“Please,” I said, so afraid that my new best friend would get me into trouble, or worse, not want to play with me anymore. “Josephine will know if we touch them.”

“You’ve never played with them?” Her voice sounded sorry for me.

“No, but I saved some of the ones she was throwing away when she stopped making the nurses. They’re in my room. You want to see?”

I led her down the hall to my room, which was actually a large pantry that Dad said he had converted because it was small like me. When I was really little it had scared me to sleep on the main floor by myself, but Josephine said there were only three bedrooms upstairs and Melinda was too big for the pantry when she was at home. “Be glad you got that,” she said. “Folks round here sleeps six to a bed. Quit squawking.”

My windowless room was pitch black. I turned on the light.

“Holy shit!” Katie ran the three steps toward the refrigerator box that ran along the opposite wall. “It’s like a real house.”

When we’d bought the new fridge the year before, I had begged Josephine to let me keep the carton. She was adamant that it was going into the garbage until Dad made her a deal that he would get her a new sewing machine to make her dolls’ dresses. I had spent weeks colouring the cardboard with flower boxes and lace-curtained windows and a white cat and a black dog, then surrounded it with a white picket fence I made out of construction paper. Unfortunately, I kept stepping on the fence in the middle of the night when I woke up to go to the bathroom, or worse, had already gone and needed to change my pyjamas and bed sheet.

Katie and I crawled inside and sat on the cushions I had set up in front of a smaller box that served as a table. We pretended to drink tea from the toy cups and eat make-believe cookies with the nurse dolls. Katie put on a British accent and pretended she was the Queen of England. I was laughing and holding my stomach when she put down her cup and switched back to her own voice.

“How come you calls your mother Josephine?”

“That’s her name, sure,” I said, biting into my imaginary cookie.

“Don’t she get mad when you call her that?”

“No. Should she?” I lifted the pretend plate. “You want another one?”

“Well, yeah, she’s your mother,” she said, her voice rising. “You can’t call her by her real name.” She looked at my hand. “No thanks.”

Katie screwed up her nose. “Your family’s different.”

“You hardly got any brothers and sisters and cousins and stuff, and your mother plays with dolls, and you got a funeral home. Weird stuff like that. You know.”

I had never thought about it, yet I knew she was right. I also knew that I didn’t want to be different or weird. I wanted to be normal like everybody else. More than anything, I wanted Katie to keep on being my best friend.

“I like different.” She crawled out of the box. “Got to go, see you tomorrow.”

As she danced out of the house, I heard her mutter, ‘Agnes,’ under her breath.

“Dad whacked me across the arse, said not to be disrespectful,” Katie told me the next day on the way to school. As soon as she’d arrived home she had tried the name out on her mother. I don’t know what made the bigger impression on me, that I’d actually had an influence on someone or that her father had hit her and she was laughing about it. I never laughed when Josephine hit me.

From that day on, in an effort to be respectful, I tried to call Josephine ‘Mom’ when I spoke of her, though not to her face. She would find that odd. It took several months to muster up the courage to ask her about it. Melinda had come for a visit and I’d noticed that she didn’t call Josephine ‘Mom’ either. When she was talking to her, she didn’t call her anything, and when she was talking about her, she called her ‘Her’ or ‘Herself’, with the sound of a capital at the beginning, as if that was her name.

We were eating breakfast after Mass. Dad went to the first Mass every Sunday, and if I was up I went with him. Melinda had cooked the porridge, which was good she added more raisins than Josephine. Christmas music was coming from the TV.

“How come we don’t call you ‘Mom’?” I asked Josephine.

She glanced uneasily at Dad, who looked uncomfortable all of a sudden. Melinda did too, her spoon stopping part way to her mouth.

Josephine bit into a slice of blood pudding. “No reason.”

“What did Katie say now? That brat always got something to say, no matter–”

I smiled at him, pleased that he’d stood up to Josephine for me. “Katie said –”

“Now, Bridgina,” said Dad, butting out his cigarette. “Don’t be talking back.”

“Youngsters today!” Josephine spat out, her mouth spraying half-chewed crumbs and grains of sugar. “No respect at all.”

There was a tense silence. Josephine glared at Melinda, then at Dad.

Melinda put down her romance novel. “Let it go, Bridge.” There was a dead-on look in her eyes, a look that said not to argue. A warning.

So I let it go. For ten years, I left it alone. Yet every once in a while, I’d remember that look, that conversation, and wonder what they all knew that I didn’t.

Wilhelmina Fitzpatrick grew up in Freshwater, Placentia Bay, Newfoundland, the sixth of seven sisters. She is the author of the bestselling cookbook, The Everyday Gourmet, and lives in Calgary with her husband and two sons.