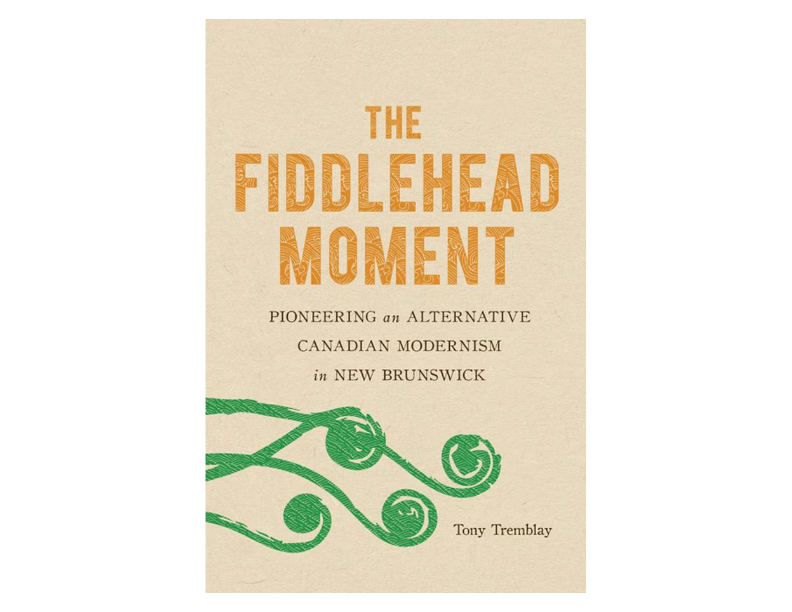 In his new study of 20th-century New Brunswick literary life, Tony Tremblay reveals that another name considered for the journal The Fiddlehead before its birth in 1945 was The Water Lily. Celebrating its 75th anniversary this year, The Fiddlehead evokes ferns-on-the-way with their musical-instrument shape, earthy taste and associations with the St. John River valley in spring.

Wouldn’t a lily suggest delicacy, wateriness and (Monet’s paintings notwithstanding) conventional beauty? We can be glad that Tremblay’s book isn’t titled The Water Lily Moment.

As Canada Research Chair in New Brunswick Studies and founding editor of the Journal of New Brunswick Studies, Tremblay is very well-qualified to write about his home province. Based at St. Thomas University, he has done unmatched archival work, and his microscopic labours combined with wide-ranging thought have produced a valuable, overdue study.

Of five chapters in his new book, three each focus on a single figure who affected UNB in major ways: AG Bailey (1905-97), Desmond Pacey (1917-75) and Fred Cogswell (1917-2004). One of Tremblay’s approaches is biographical, though he often writes through the lenses of politics, sociology and economics.

The Fiddlehead Moment shows us clearly how the drive and originality of individuals, paired with institutional support, can help widen a province’s educational and cultural worlds. In 2020, how refreshing it is to find Bailey saying in 1946 that university studies should transcend “the merely vocational” (“earning a living”), and to learn that Pacey sent guest lecturers to far-flung schools, with the goal of encouraging reading rather than, in Tremblay’s words, “recruiting local students.”

With roots in both Quebec and New Brunswick—his family’s UNB affiliations going back three generations—Bailey comes across as the most broadly learned and variously gifted of the three. He wrote the first book-length ethnohistorical study of the struggle between European and Eastern Algonquin cultures, and later compiled a book of his essays, still valued today, Culture and Nationality.

In 1938, Bailey became UNB’s first professor of History (he’d joke that for years he was, as its only full-time member, “the head, body and tail of the department”). One of his most ambitious projects was to greatly enlarge the university library’s holdings, under the eye of Lord Beaverbrook (“Bailey’s genius…was to don the persona of a manservant while steering Beaverbrook in the directions that UNB and the province needed to go”). Mostly significantly for Canadian poetry, Bailey, the finest artist of the Fiddlehead Moment trio, wrote poems in modes ranging from metaphysical density to fantasy/fable to memoir/history.

After being hired by UNB in 1944, Pacey, having grown up in New Zealand, England and Ontario, quickly adapted to his new surroundings, and found inspiration in Bailey’s vision of expanding educational offerings. In the 1950s, he published two innovative works of alternately celebratory and calling-a-spade-a-spade criticism of Canadian fiction writers and poets. He should also be honoured as the administrator who laid the groundwork for the first writer-in-residence program at a Canadian university (at UNB in 1964).

Cogswell’s major efforts went into reconfiguring The Fiddlehead as an international journal, creating and almost single-handedly operating Fiddlehead Poetry Books (the foundation of today’s Goose Lane Editions), mentoring many beginning writers, and writing his own poetry. He also translated Acadian and Quebec French-language poetry, an activity he enjoyed but also participated in with a civic sense of bilingual, bicultural curiosity and respect.

The “alternative Canadian modernism” in the subtitle of Tremblay’s book has at its heart a belief in the complementary values of provincial interests (not provincialism), nationalism and cosmopolitanism. The stereotyping of Maritimers as parochial and behind-the-times resulted in feisty exchanges, then as now. Pacey voiced strong disagreements with Montreal poets’ dismissive judgments of earlier Maritime writers. (Considering that, it’s appealingly ironic that Tremblay’s book is published by McGill-Queens University Press.)

Tremblay acknowledges that universities were overwhelmingly male-dominated. In discussing NB-born Elizabeth Brewster, a student “considered by her peers to be the most gifted of the early Fiddlehead poets,” he speculates what opportunities would’ve opened for her if she’d “emerged at a time more accepting of women in the academy.”

After Brewster completed a doctorate in Indiana in 1962, but only after a detour into Library Science studies, a decade would pass before the University of Saskatchewan hired her. Many of us will wish that for his 1958 male-monopolized Ten Canadian Poets, Pacey had gone with his initial—but later set-aside (to his subsequent regret)—hopes to include chapters on Dorothy Livesay and PK Page.

In a study as detailed as Tremblay’s, errors and missteps are hardly surprising. Reading that Confederation poet Bliss Carman had “more than passing influence on the intellectual development” of Pound, Frost and Stevens, many readers might wince at the grandness of the claim; a reference to “Chinese haiku” is puzzling in relation to the most Japanese of poetic forms; and Tremblay risks provincial boasting when he claims that New Brunswick modernism “was much more ambitious in its reformist agendas” than urban modernism grounded in Montreal and Toronto.

Tremblay follows in the footsteps of his subjects Bailey, Pacey and Cogswell. With an unmistakable passion for the history he tells, passages of narrative colour, and analytical intelligence and thoroughness, The Fiddlehead Moment contributes much to our understanding of Maritime and Canadian literary cultures.

Another delightful irony: it’s taken a St. Thomas prof to write such a lively, significant book delving into the history of the university just down the hill.

Brian Bartlett is a poet, essayist, nature writer and editor living in Halifax. He has published 14 books or chapbooks of poetry, two prose books of nature writing, and a compilation of prose about poetry.