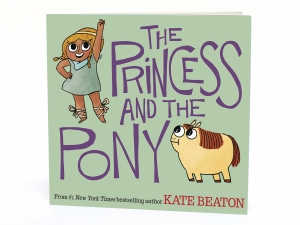 Feisty Princess Pinecone may be small but she has big dreams. This year she has set her sights on a birthday present befitting her true warrior status: a horse! No more cuddly sweaters for her. This year she has let it be known that she wants a big, fast, strong steed. Instead she gets a short, round, perfectly-pleasant little pony with eyes that look in opposite directions (but only sometimes). With some misgivings, Pinecone and her new pony enter the kingdom’s big battle. Much to her amazement, her roly-poly pony captures the hearts of even the fiercest warriors… not to mention the Most Valuable Warrior trophy.

Kate Beaton’s plucky princess and her big-eyed, charmingly dopey sidekick are a truly delightful duo. In this clever, witty tale the uplifting messages about unlikely heroes (and that even warriors need to embrace their cuddly sides) don’t get in the way of the fun and silliness. The fact that the pony happens to fart excessively will tickle the funny bones of the book’s intended audience, but their parents will enjoy the dry humour in the text itself. Adults and children alike will appreciate the bold, cartoon-y illustrations.