East coast writers swarm the genre like it’s an overtime scramble in front of the net. Recent examples of ice guys finishing first are Maurice Richard: The Most Amazing Hockey Player Ever by Chris Robinson (Formac), East Coast NHLers: The Stories of Leading Players from the Maritimes and Newfoundland by Paul White (Formac) and Faulkner: A Hockey History by Tom Rossiter (Breakwater Books). 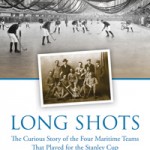 Trevor Adams’s Long Shots (Nimbus), a book about four Maritime teams who played for the Stanley Cup a century ago, is due out this fall. Adams, the editor of Halifax Magazine, first heard whispers of the story in a book he read as a boy.

“[The author] just very off-handedly, in about seven or eight lines, mentions a couple of these teams and the fact they challenged for the Stanley Cup and lost,” he says.

The idea that a team from New Glasgow could challenge Toronto or Montreal for the Cup captivated him. He came across a reference to it more recently and decided it was time to write.

It was the era of the challenge cup, much like in boxing or mixed martial arts today, when gatekeepers decided who had earned a shot at the trophy. In that pre-professional time, outsider teams like the Halifax Crescents, the Sydney Millionaires, the Moncton Victorias and the New Glasgow Cubs all got a shot at glory.

“I discovered this era of hockey in the Maritimes that was just amazing, vibrant and fearless,” he says. “The broader theme became how hockey went from this grassroots, amateur thing, to this professional beast. As part of this growth, it outgrew the place where it began.”

Authors Darril and George Fosty set out to write a wrong in Canadian hockey history. The B.C. brothers who now work in New York started with Splendid is the Sun: The 5,000 year history of hockey (Stryker-Indigo Publishing) and got into Atlantic Canadian hockey with Black Ice: The Lost History of the Colored Hockey League of the Maritimes (Nimbus).

George Fosty says it began when he stumbled on an old photograph of a black hockey team in Halifax. At first, experts told him the CHL never existed, or was just a “vaudeville act” and that black men never played hockey. But the intensity on the men’s faces convinced him it was for real.

The brothers traced the photo to the Black Cultural Center in Cherry Brook, N.S., and that led to other photos, newspaper articles and league records. “Now we know there were over forty all-black hockey teams between the 1890s and the 1940s,” he says. They were scattered across North America, but the centre was in Boston and the Maritimes.

The Fostys found breathless sports reports of the CHL and its high-energy style, which pioneered the slap shot and butterfly goaltending. The league was ultimately done in by racism, recession and wars.

“A league that was taken out of the history books is now back,” George Fosty says. “It took years for the Negro baseball leagues to be accepted. We’re assuming it’s going to take generations for black hockey to reach the level of acceptance it deserves.” 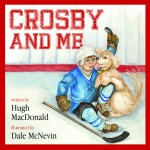 A different approach comes from Hugh MacDonald. The P.E.I. poet’s Crosby and Me (Acorn Press) is a children’s book about a boy who loves the game. The Crosby in the title refers not to the sidelined superstar, but to the family dog. The illustrated book was a contender on CBC’s Battle of the Hockey Books.

MacDonald admits it’s not entirely a work of fiction—he and his wife have five boys and one daughter. “Schoolteachers tell me it’s a good book for introducing discussions of family dynamics and family relationships,” he says. “But it’s also about hockey and playing for the love of the game. It should be something that binds families together.”

He says he wrote about how hockey is experienced by the vast majority of players: as a thrilling sport for boys and girls in cold rinks across Canada. “This is something that is supposed to be fun and that helps everybody to grow,” he says.

MacDonald admits the poem the book is based around has been around for a while—the original title was “Gretzky and Me.”

Looking for more hockey book action? Check out these excerpts: