Books in the family

How three Atlantic Canadian families have made publishing a family pursuit

Although book love isn’t genetic, it certainly seems to run in families. But what’s it like working in the book industry and sharing genes with other authors, illustrators or publishers? We decided to find out. 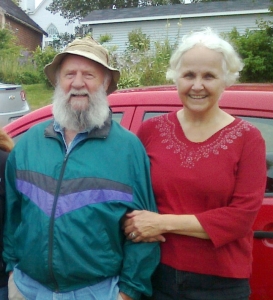 Frank Macdonald and Virginia McCoy, the author of Possible Madness and the celebrated painter and illustrator,  met in someone’s kitchen, while they were both working for the Inverness Oran newspaper in Cape Breton. It took a bit of time for both of them to find their way into the book world, and when they did, it was almost by accident.

In 1985, MacDonald attended a writing program at the Banff School of Fine Arts. It was during that time that he came up with A Forest for Calum.

“My grandson was turning 11, so one night, when I was staying at Virginia’s, I began writing him the story,” says Macdonald. “I wrote a couple of chapters and the next morning, I showed it to Virginia.”

McCoy read it, and immediately asked to illustrate it. Macdonald agreed, and the couple printed the gift on the black and white printer at the newspaper office. Several years later, it was published by Cape Breton University Press.

Later, the couple collaborated again, on another book called T.R. Adventure at Angus the Wheeler’s. These days, McCoy’s veered away from books, but there’s still a chance for they’ll work together again in the future.

“I think Frank and I work together well,” says McCoy. “I enjoy his imagery and so I have a good time representing it on paper.”

George Murray and Elisabeth de Mariaffi’s relationship is based on teamwork—whether they’re writing or parenting. Although Murray is a poet, whose forthcoming collection Diversion (ECW) comes out in September, and a children’s book author  (Wow Wow and Haw Haw), and de Mariaffi’s a novelist (The Devil You Know), it’s a mutual understanding of the business that makes it work.

They also edit each other’s work.

“George is really my first editor, and he’s a very sharp editor, so that’s wonderful,” says de Mariaffi. “Having a in-house editor is pretty lucky.”

Since they’re both freelancing, their flexible schedules make it easier to juggle the writing and the kids.

“When Elisabeth’s writing, she puts a big sign on the door that just reads ‘No,’” says Murray. “When she puts the sign on the door, any one who reads it knows that the answer to any questions will just be ‘No.’ So they come and ask me. And when I need time, she takes over.”

This family has bookish roots reaching back through generations—and the literary family tree shows no sign of slowing down.

According to Jennifer Morgan, author of Breakwater Books’ Almost Home: The Sinking of the S.S. Caribou, the family’s storytelling culture had a lot to do with her own writing pursuits. Her mother is Bernice Morgan, a bestselling St. John’s author who’s been writing since Jennifer was small.

“Growing up, words were always really important,” says Jennifer. “Even in elementary school, I would show my mom my essays, and she would give me a critique. So I grew up with that level of attention paid to what I wrote, along with an appreciation for storytelling.”

Bernice was also an inspiration to Jennifer’s cousin, Trudy J. Morgan Cole (Atlantic Book Awards nominee, A Sudden Sun). Four years older than Trudy, Jennifer was a teenager when Bernice’s work took off, and as a result, she was able to look at Bernice as a role model.

“I talk to many writers who say that their families treated writing as though it was out of the realm of possibility for a career, but for me, it always seemed totally plausible,” says Trudy.

Now, the next generation’s starting to dip their toes in the water. One of Trudy’s children is writing short stories, and the other is a songwriter—and Bernice couldn’t be happier.

“It’s very satisfying to see young people who love books and love words,” she says. “It inspires me and it reassures me to see it in another generation.”