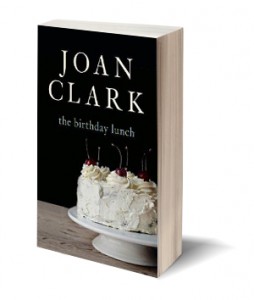 Joan Clark was kind to me after my mother died. In early 2013, we were both at the University of New Brunswick in Fredericton, she as the Writer-in-Residence and I as an organizer of extension courses. We met to discuss the possibility of her leading a writing workshop. Mum had died the month before and I was disconsolate. Clark had comforting words of wisdom for me about death in general and the passing of her beloved husband. When our meeting ended she hugged me and said that, eventually, my grief would prove easier to bear.

At the time Clark was working on the fourth draft of her latest novel, The Birthday Lunch, which examines the death of wife and mother, Lily McNab. The book, set in Sussex, NB, where Clark once lived, and containing elements of her own past, begins on Lily’s birthday – the same day she is killed by a careless driver. The remainder is devoted to how those left behind, Lily’s husband; children and sister, handle the loss and begin to reorganize their lives without her.

Death, expected or not, is usually followed by shock, disbelief, anger, guilt, blame and sadness. Clark’s characters navigate through this morass of emotions as they plan Lily’s memorial service, and attempt, each in his or her own way, to uncover exactly what happened on the day she died.

The Birthday Lunch is a psychological study of human behaviour, a delving into why we make the choices we do and what we tell ourselves, and others, as we learn to live with the consequences. Joan Clark is a master at depicting human relationships in all their complexity, and this novel, like the rest of her fiction, with its eloquent, straightforward prose, creates a cast of believable, funny, irritating and fallible characters whom we grow to care about because of, or despite, both them and ourselves.

Fittingly, this review of The Birthday Lunch was written on Mother’s Day, an occasion on which, whether one’s mother is alive or not, one reflects, rejoices or cries, but, inevitably, has to move on.