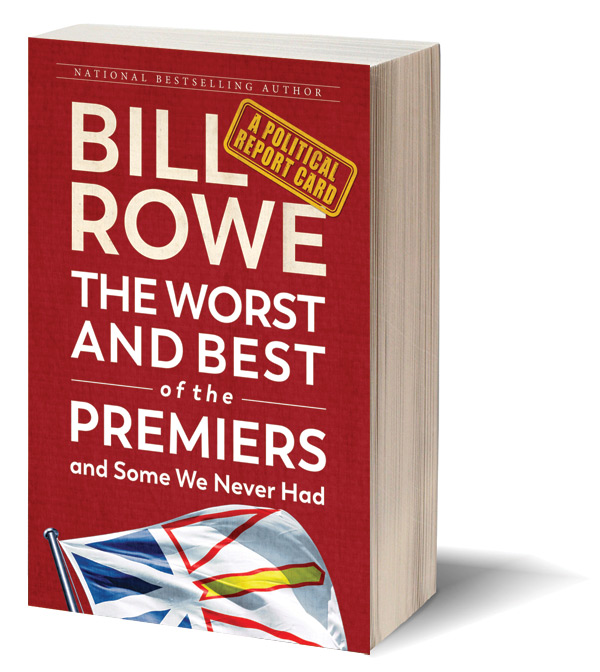 Newfoundland writer Bill Rowe is back again like a modern-day Solomon with more political tales to tell. Those accustomed to his brutal frankness in evaluating premiers Joey Smallwood, Frank Moores and Danny Williams have been clamouring for him to dish on the full cast of characters animating that province’s unique political culture.

With ten popular books under his belt, the recovering politician returns with a highly personal, “no punches pulled” report card on the Rock’s strange collection of political leaders since 1949 ranging from the heavyweights to the lesser lights.

His latest, The Worst and Best of the Premiers and Some We Never Had, provides another feast for political junkies. Some forty-two political leaders are essentially roasted in a highly uneven set of short vignettes concluding with the author’s rather idiosyncratic and dubious percentage grades.

Bill Rowe’s earlier books on Joey Smallwood and Danny Williams were insightful and brutally honest portraits of earth-shaking, messianic political overlords. His current offering falls far short of those standards and tastes, for the most part, like an assorted collection of leftovers.

Premier Smallwood is growing on Rowe. After savaging him in The Premiers Joey and Frank, he confesses that critics called him “nuts” for ranking Moores ahead of Smallwood. “Dragging Newfoundland kicking and screaming into Confederation” is recognized as his crowning achievement. Setting aside his personal dislike of Joey (“the prick”), he raises his standing to 85 percent and downgrades Moores to 75 percent. Moores’ sleazy and scandal-ridden politics needed to be weighed against his success in ending Smallwood’s 23-year stranglehold on power.

The best part of Rowe’s book is his more detailed and nuanced portrayals of the Crosbies, father Chesley A (Ches) Crosbie and son John Crosbie. As a leading St. John’s businessman and political kingmaker, Ches campaigned in the 1948 referendum for Economic Union with the United States and, according to Rowe, “built better than he knew.”

Son John fell short in his quest to become premier, but Rowe recognizes his accomplishments as “number two man” in St. John’s and a formidable cabinet minister in Ottawa. Bringing home the bacon also earns John a mark of 85 percent, equaled only by his political nemesis, Joey Smallwood.

Rowe is definitely old school when it comes to awarding grades. Sixteen of the forty-two politicians assessed are awarded failing marks, confirming their status as hapless and forgettable politicians. In one rather sad case, former Progressive Conservative leader Ed Byrne, who paved the way for Williams’ 2003 accession to power, is awarded a 25 percent grade for being convicted of fraud for grossly inflating his expense claims.

Rowe claims that his report card tends to judge the province’s third-party leaders differently. That may be so, but it is still heavily skewed toward electoral success, favouring those in the dominant Liberal and PC parties. One notable exception, Lorraine Michael, NDP leader from 2006 to 2016, earns praise and a 65 percent rating for winning a coveted seat and holding government to account while battling breast cancer.

Surveying this rather irregular and ragged collection of vignettes, it becomes clear that this is not vintage Bill Rowe. Constrained by the laundry-list format, he gives a few notables like Frank Moores and Brian Peckford short shrift in his attempt to get everyone in.

Merely cataloguing the political leaders comes at a cost, especially when it comes to drawing linkages and making connections across time. The Crosbies of St. John’s, elder and younger, consume many pages and would be better in a section of their own. The same can be said of the St. Andrew’s College boys, John Crosbie, Ed Roberts and Frank Moores, all of whom spent their formative years in that exclusive Ontario boarding school.

Rowe’s own personal biases colour his judgement, especially when assessing political rivals during his time in the House and in cabinet. He is particularly hard on his one-time cabinet colleague, Ed Roberts, an impressive Liberal politician who served as opposition leader from 1972 to 1977 and was foiled in his 1975 bid to become premier when Smallwood backed Liberal Reformers to divide the vote.

Rowe successfully challenged Roberts for the Liberal Leadership in 1977 in what the author describes as “a vicious process” with, it is clear, wounds that have yet to heal. His bitter rival–a Newfoundland public figure respected for his intelligence and erudition, elected in his home riding through thick and thin and serving as a legislator for 25 years–deserved better.

Grading contemporary politicians can be risky because their legacies only become clear in the fullness of time. As the afterglow of his colourful and activist PC regime fades, Rowe has downgraded Danny Williams in the light of the collapse of oil revenues and the incredible cost-overruns incurred with Muskrat Falls. He’s surprisingly soft on Williams’ successor, Kathy Dunderdale, and simply rolls the dice in venturing an assessment of current premier, Dwight Ball. That grade of 50 percent for Ball looks like a conditional pass at best.

Then again, attempting to rank political leaders anywhere may well be a mug’s game.

The Worst and Best of the Premiers and Some We Never Had: A Political Report Card
Bill Rowe
Flanker Press