Beware the gales of August 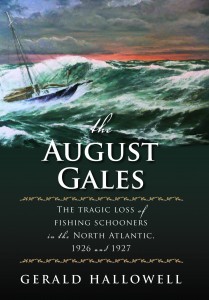 Literature, like all art, is subject to that mysterious tide of interest we label Zeitgeist. This season has brought the publication of three non-fiction books that, in different ways, explore the devastating storms that rocked fishing communities in Newfoundland, Nova Scotia, and New England in the late 1920s: The August Gales: The Tragic Loss of Fishing Schooners in the North Atlantic, 1926 and 1927 (Nimbus Publishing); The Gale of 1929 (Flanker Press); and Thursday’s Storm: The August Gale of 1927 (Flanker Press).

For all three authors, this is a tale of terror on the sea and heartbreak on land. There is little doubt that the devastating Asian tsunami of 2004 may have had the effect of turning Atlantic Canadians toward their own historical battle against the cruel and unpredictable elements. The gales of the late 1920s were indeed especially destructive, causing great upheaval and hardship. But what brings these three authors to the same focus is revealed in the preface of Darrell Duke’s Thursday’s Storm: The August Gale of 1927.

Tributes to the past

The author tells readers about his research in 1993, when he gathered experiences from Placentia Bay families. He writes of “gigantic men whose hands were like catcher’s mitts” yet who would “bawl like babies” as they recalled the tragedies of the past.

All of these books, in their various ways, are tributes to a past that is within living memory—but only just within it. They are driven by a sense of urgency, and by a sense of love too, as the authors are steeped in the heritage they strive to reclaim. In this sense, the sum of work within these pages represents a democratization of history-based literature. The approaches are not academic, and certainly not cold. Duke, for instance, is connected to these events by family. He is also a songwriter who understands the music within the language and the idioms he knows. He describes a kettle as “boiling mad.” A young couple “kissed their way through the winter.” The question of when mourning families will “raise the blinds” recurs like a riff through the final chapters. 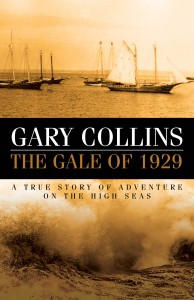 Gary Collins, in The Gale of 1929, poignantly dedicates his work to “the women of seamen who wait on the shore then and now.”

Like Duke, he gets inside the drama as though it were fiction. Each chapter follows the story of one of 11 schooners caught in the 1929 gale, and he moves swiftly from scene—complete with action and dialogue—to history, and back to scene again.
Collins’ fine sense of pacing gives the drama a constant motion; when things become still, it’s an ominous stillness.

Like many Newfoundlanders steeped in an oral tradition, his descriptions can be deeply lyrical. The coastline of Newfoundland sometimes “appears as a snarling, mythical leviathan rising out of the sea, crouched and waiting.”

In The August Gales: The Tragic Loss of Fishing Schooners in the North Atlantic, 1926 and 1927 Gerald Hallowell maps out a “piscatorial triangle” with Lunenburg, NS, Gloucester, MA, and southeast Newfoundland marking its three points.

At the beginning of The August Gales, Hallowell paints a scene in which thousands converge on the wharves “under a brilliant blue Lunenburg sky” for a procession and wreath-laying ceremony to mourn those lost in the gale of August, 1926. He cleverly brings us into the era by using contemporary vocabulary. 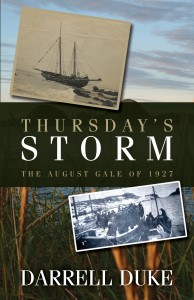 Oral history, gathered informally, is often seen as inferior to corroborated, written documentation, and in terms of historical certainties, this indeed can be the case. But we often ignore the fact that the way people remember events tells us more about the collective imagination—the essential character of a people—than the historical record.

Interestingly, Hallowell, while certainly writing in a popular vein, notes sources in his text and with a bibliography. While involving and respecting the communities, this elegantly-written history will also come close to pleasing those requiring academic vigour.

But Duke’s work also lays special claim to commendation. His primary research sources are, after all, the people who have lived through the events. Such exhaustive research must surely count when it comes to measuring the authenticity of the events described in his work.

Collins’s research method is also expanded upon in an afterword; he talks of how he sat “in many kitchens and listened and recorded as the yarns were passed down.”

There is a sense in each of these works that when an author announces an intent to work on a book, the whole community joins in a concerted effort to record all that is known. They want to know that when the publication sees the light of day it accurately reflects how the community feels about the lives recorded in its pages. The work, in short, springs from the community.

This process could explain why the toil, the play, the nuances of emotion, and the patterns of speech in all three of these books come to life so vividly on the page.

Paul Butler is the author of several novels including Titanic Ashes, Hero, NaGeira and Easton’s Gold. His website is paulbutlernovelist.wordpress.com.