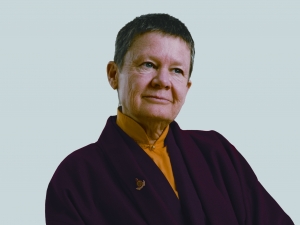 Buddhist writings make sense; they are definitely works for our current age. These days Buddhist practice and thought is influencing more aspects of our lives than ever before, moving into mainstream culture, attracting readers in the arts, the environment, business, hospice care, psychotherapy, and, my discipline, yoga. Publications cover every aspect of living, from parenting and children’s books to recycling and philosophy.

As Melvin McLeod, Editor-in-Chief of Shambhala Sun periodical in Halifax and editor of Best Buddhist Writings 2009, says, they are not just for committed Buddhists, but for anyone who seeks thoughtful direction in life.

At Westminster Books in Fredericton, New Brunswick, marketing person Gloria Nickerson says there is a constant interest in Buddhist books from the very active Buddhist community in that area. “Biographies of the Buddha such as Deepak Chopra’s new one are currently popular”, she says. “There is also an increasing number of what we call cross-over books, such as Buddhism and business, which suggest a Buddhist approach to doing business.” Mike Munro is co-owner of Therapeutic Approach Yoga Studio in Halifax, Nova Scotia, where he teaches and offers Yoga Teacher Training. He belongs to the Halifax Nalandabodhi Study Group. Members practice and study the teaching of the Buddha under the direction of Dzogchen Ponlop Rinpoche who is acknowledged as one of the foremost scholars of his generation in the Nyingma and Kagyu schools of Tibetan Buddhism. Rinpoche has three books in print: Penetrating Wisdom: The Aspiration of Samantabhadra, Wild Awakening, and Mind Beyond Death. The latter has been described as an indispensable guidebook through the journey of life and death.

Mike says, “A key book that helped start my journey was The Wisdom of No Escape by Pema Chödrön. I am currently reading Brilliant Moon by H H Dilgo Khyentse Rinpoche. It’s an autobiography about my Guru Dzogchen Ponlop Rinpoche’s teacher. It’s very revealing and inspiring to read about the life of your Guru’s guru. Another book that inspired my journey was Shambhala: The Sacred Path of the Warrior, by Chogyam Trungpa Rinpoche. It talks about meditation and integrating it with daily life and family and creating enlightened society. These two books really helped me understand the meditation journey and encouraged me to make it a part of my daily life.”

There are a number of Shamabala Meditation Centres throughout the Atlantic region. Usually they provide free, qualified meditation instruction and a wide range of classes and programs in meditation and Buddhist teachings. Some centres offer special programs for children; often including art projects and theatre; all promoting mindfulness.

Talking to a Shambhala member from Saint John, New Brunswick, books mentioned were The Myth of Freedom, and Journey Without Goal by Chogyam

Trungpa Rinpoche. Meeting the Buddhas: A Guide to Buddhas, Bodhisattvas, and Tantric Deities, by Vessantara, was also recommended. The Buddhist authors most often enthused about are the Dalai Lama, Pema Chödrön, Chogyam Trungpa and Thich Nhat Hahn.

Several years ago, serendipitously I picked up a book that had an immediate and lasting influence on my life and teaching. Thich Nhat Hahn’s joyful teaching on ‘mindfulness’ immediately resonated. A concept I recognised as needed in my own life and which became a focus in my yoga practice and teaching. It’s a word I use daily. When I do meditations, particularly with beginners, we use his Mindfulness of Breathing Meditations.

Other books that have affected me include the Dalai Lama’s writings, Cave in the Snow, a fascinating story of a British woman, student of Chogyam Trungpa, who became a Buddhist nun. Underlying the connection between yoga and Buddhism I have studied with Frank Jude Boccio, yoga teacher and ordained dharma teacher. His book Mindfulness Yoga is a very accessible read.

So it was with a sense of anticipation I opened the first of the two books reviewed here. Reading Taking the Leap, the latest book by Pema Chödrön, the renowned American Buddhist nun now teaching at Gampo Abbey in Cape Breton, it was as if she was sitting on the tree-shaded deck with me talking, elucidating, encouraging my mind to open to the freeing, the letting go, the pausing. All necessary, she believes, for us to break free of old habits and attachments, to be present and stop our ‘knee jerk’ reactions to situations. I am familiar, like most people, I imagine, with shenpa, the Tibetan word for that tightening, shaking in the belly we experience in uncomfortable situations. Pausing, taking three long, slow, conscious breaths helps us find balance and prevents the accustomed response.

Pema Chödrön’s writing is clear, down to earth. The precepts she offers are universal; we are with her all the way. It’s as though we have always had these thoughts, this knowledge but been unable to articulate it. She brings it to the front of our minds with clarity, and a touch of humour. Read this book a chapter at a time, meditatively savour it, embrace it. It’s important because it is ‘the’ leap not just ‘a’ leap.

McLeod edits the annual collections of Best Buddhist Writings. Of Pema Chödrön he says, “I love her writing. Her message is hard-nosed, demanding, the ultimate teaching from a core of honesty. Her writing has evolved from personal to the global.”

In the 2009 edition of Best Buddhist Writings you will discover powerful and inspiring articles, essays and stories that speak to contemporary issues. Many are personal, some narrative, others teach, are analytical, intellectual. Taking a break in my garden while reading I knew exactly what Wendy Johnson meant when she wrote; “Sitting still on the earth restores you to yourself.” You will be inspired by the couple coping with Alzheimer’s, by the meditation on dealing with death; filled with sorrow, yet a sense of delight reading of the rare blossom that was infant Liam; touched by ‘Santa without the suit’, respond to Thich Nhat Hahn’s clarion call for eco-spirituality and certainly laugh out loud with Rabbi Rami Shapiro.

Both books are concerned with our relationship with others, the environment and the world. The writings help us to face life’s difficulties and concerns, openly and directly, working to alleviate suffering for all beings. They are salutary and stimulating.

Dan Keating, member of the Fredericton Shambhala Meditation Centre, sums it up succinctly; “What I appreciate about a lot of Buddhist writing is a willingness to look at things “as they are”, without having to dress things up particularly. I think this is refreshing for some people and somewhat stark for others. Buddhist writing can be very mundane on one hand and profound and deeply challenging on the other.”