Book reframes the debate around a dark chapter in Nova Scotia’s past: the Shubenacadie Residential School 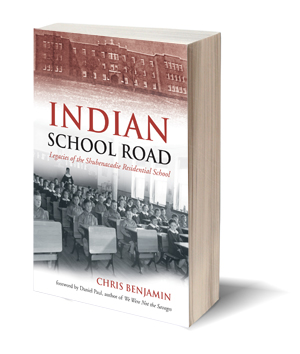 I opened Chris Benjamin’s Indian School Road expecting to learn about a dark chapter in Mi’kmaw history. Instead, I found a forensic examination of an even darker chapter in European-Nova Scotian history: the Shubenacadie Residential School.

As Benjamin makes clear in the book’s dedication to his children, “even at its ugliest, the truth is less repulsive than lies.” And this is an ugly truth indeed. Instead of focusing on the victims of horrifying sexual and physical abuse, of scientific experimentations involving starving children and of people brutally cut apart from their culture, Benjamin skillfully turns the lens onto the perpetrators.

This is not to downplay the survivors, but to reframe the debate around the people who have somehow remained invisible until now – the bureaucrats who founded the school, the nuns and priests who ran it, and the numerous public officials and journalists who looked straight at sadistic abuse and saw a noble attempt to “civilize” Mi’kmaq children.

Indian School Road is meticulously researched and reads like an agreed statement of facts for a terrible crime. And that’s what you realize: the whole thing was a terrible crime, but one for which no one was ever charged. Mi’kmaq readers may gain insight into why they and their parents or grandparents were thrown into such a nightmare. Non-Mi’kmaq readers will stare straight at an attempted cultural genocide carried out (or tacitly supported by) our parents and grandparents.

It’s a repulsive truth, but reading this book will at least get us past the comfortable lies.