Beatrice MacNeil’s The Geranium Window is a Tour de Force 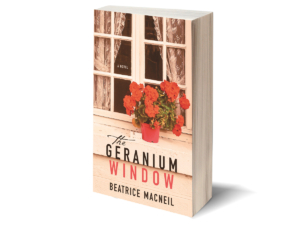 Three-time Dartmouth Book Award winner Beatrice MacNeil’s newest work, The Geranium Window, is truly un tour de force, certain to garner even more awards. It would certainly be deserving of them as it is an exquisitely crafted novel that works on many levels. There’s MacNeil’s lyrical prose, which is pure poetry; there’s her insight into the human psyche and relationships and there’s a compelling narrative that explores the destructive power of secrecy and shame and the redemptive power of love and vision.

Set in the mid-20th century in the fictional village of Rocky Point, Cape Breton, the novel focuses on the prominent Briar family, who as mill owners are the village’s main employer, and the corrosive affect their secrecy has on three generations.

As an only child, Duncan Briar was taught by his bitter mother, to whom outward appearance was everything, to hide the secret of her loveless marriage and his father’s suicide. Now as the patriarch of his own family he’s determined to deny any semblance of what he perceives to be personal weakness or failure. The greatest threat to that, he believes, is his third and youngest son Joseph, born with unspecified disabilities when Duncan was in his mid-sixties. Joseph, who Duncan refuses to even look at, is kept hidden and never spoken of, so that the Briars are known in the community to have only two children, Anntell and Arthur.

Allegorical in nature and universal in appeal, The Geranium Window explores the meaning of vision and the lens we use, which can clarify or distort. It may be a narrow lens reflective of the rigid standards Duncan imposes on himself; one clouded by alcohol, through which his daughter Anntell escapes; the lens of love which helps her grandmother, blinded by glaucoma, to recognize the hurt inflicted on the family or the metaphoric lens of a garden, through which Rosie, Duncan’s wife, sees her children.

Anntell, who leaves home as soon as she finishes high school, “was like the wild rose,” Rosie says, “she never cared which way the wind blew, but her beauty was dangerous in a storm”; Arthur, killed in an accident caused by his feelings of guilt, was a “tiger-lily, spotted and hard-rooted,” while Joseph, the child she’s forced to hide, was like the geraniums on the window ledge of his locked room. “He collected gladness from behind those plants. They needed to be loved and nurtured as he did.”

It’s the allure of the secret behind the geranium window which first pulls aspiring photographer Alfie Johns, who has his own family secrets to unravel, into a profound relationship with the Briars. Later, it’s his sensitive and truthful vision of them through the lens of his camera that restores their dignity and worth while at the same time leads to his recognition as an acclaimed photographic artist.

The Geranium Window is a novel to be treasured for both its profound psychological and philosophical insights and for the sheer beauty of MacNeil’s writing.