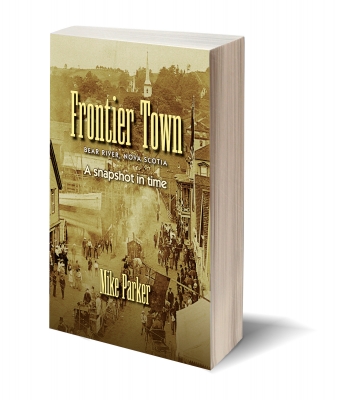 Most towns and villages in Atlantic Canada had their own photographers by the late 19th century and fortunately, these camera pioneers documented in splendid detail the daily life of the community and its citizens. Isaac Erb in Saint John, T. Hayward in St. John’s, Amherst’s Daniel Pridham, Fredericton’s George Taylor and L. Swan in Yarmouth all made significant contributions to the region’s visual record and now another historic photographer has been unearthed thanks to the efforts of historian Mike Parker. Harris Ralph photographed Mike Parker’s hometown of Bear River for over sixty years beginning in the 1890s. Parker’s new book Frontier Town, Bear River, Nova Scotia features 470 images and the vast majority are Harris’s photographs prior to World War I.

Many of the photos were only recently discovered— many having been thought destroyed in a 1970s fire. Parker uses an interesting technique in annotating the historic images. For ten years from 1897 to 1907, the local newspaper The Telephone was published weekly and Parker has been able to present insightful story clippings from the newspaper to match the historic photos. Not every photo matches perfectly with the image but the “time and tide” of old Bear River is so well preserved in the images and newspaper clippings that we get a real sense of a vibrant community that existed over one hundred years ago. When an image demands a bit more explanation in order for the reader to fully comprehend the significance, Mike Parker, with his encyclopedic knowledge of his home place, adds his own words to help explain the photograph.

The Ralph Harris photographs include many scenic landscapes, numerous streetscapes, shipyards and sailing vessels, as well as fascinating images of the local Mi’kmaq community. Also included are portraits of town folk, the surrounding wilderness and wildlife, and even a section devoted to a group of local men off seeking their fame and fortune in the Klondike goldfields and writing back to love ones in Bear River. As well we read about famed local sailor Joshua Slocum’s lecturing in Bear River in 1900 and another interesting detail includes a reference to the Bear River built Dei Gratia vessel that first located the mysterious Mary Celeste adrift at sea.

The book extends almost 300 pages and is a major piece of research about a historic community and a way of life that is no more. For those interested in local history and astute depictions of a Maritime community in the early years of the 20th century, Mike Parker’s Frontier Town deserves to be picked up and enjoyed.

Dan Soucoup has worked as a bookseller and publisher for many years. He is the author of numerous books including Maritime Firsts and Failures and Fiascos. He lives in Dartmouth.