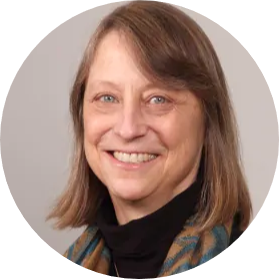 Trudy Sable
Trudy Sable, PhD, is Director of the Office of Aboriginal and Northern Research at the Gorsebrook Research Institute, Saint Mary’s University and an adjunct professor of Anthropology. She has been called a “muddy boots” community researcher and educator and has worked collaboratively for the past twenty-two years with First Nations and Inuit peoples within Canada and internationally. Her primary focus is on inter-generational, community/place-based, educational programs and research projects that bring Western science into dialogue with Indigenous Knowledge, promotion of education through the arts and developing educational programs with the Innu Nation Environment Office. She is the SMU representative to University of the Arctic and to the Atlantic Association of Universities Working Committee on Aboriginal Issues. Dr. Sable has presented and published her research internationally. Along with Bernie Francis and representatives of the Mi’kmaw First Nations, she is currently working on the Pjila’si Mi’kma’ki: Mi’kmaw Place Names Digital Atlas and Website Project.