The latest issue of Atlantic Books Today is a “robust and diverse conversation” about Atlantic Canadian books and what they say about our culture, politics, economy and societies 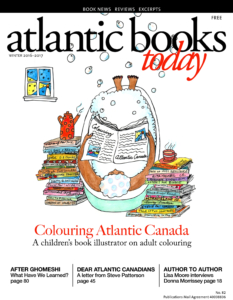 On the eve of Atlantic Books Today’s 25th anniversary, the magazine for book readers has transformed itself into a more content-rich source of entertainment and knowledge.

The new managing editor, Chris Benjamin, has led a process involving everyone at the magazine – writers, photographers, cover artist, designer, production and admin people – to create a book magazine with greater depth, “a robust and diverse conversation” as one early reader has put it.

The goal is to initiate a serious, engaging dialogue about the books written and published by Atlantic Canadians – and there are 117 of them mentioned in the new issue – with more in-depth essays and reviews focused not on the mere availability of these books, but rather their significance in our social, economic and political culture as a region.

“We wanted something meatier,” says editor Chris Benjamin. “The short reviews of the past gave a taste of the book but didn’t give a sense of the weight of it, what it had to say about us as a people and place.”

With the new approach, it was imperative that in addition to working with high-quality freelance journalists, the magazine needed to recruit writers with specific areas of expertise to offer relevant insights into particular books.

Mental health advocate Laura Burke provides an essay on the how literature brings uncommon wisdom to young readers about surviving mental illness, based on a new book by Prince Edward Island filmmaker Harmony Wagner. And former Islander Ryan O’Connor takes a long view – about 5,000 years – of the history of PEI.

Each of these essays is centred around one or more new Atlantic Canadian books. Rather than merely announce and promote the books, this new approach gives every book the weight of analysis a writer or artist deserves, contextualizing the work and considering its significance to who we are as Atlantic Canadians.

Accompanying the new content is a new look, headlined by our cover artist, Emma FitzGerald, author of the bestselling Hand Drawn Halifax. The challenge was to blend Emma’s blissful hand-drawn image of a reader enjoying a bubble bath surrounded by stacks of books into a new brand focused on serious book love. The magazine’s designer, Joseph Muise, took a whimsical, half-coloured illustration (which corresponded to the lead story about the adult-colouring-book craze, written by children’s book illustrator Tamara Thiébeaux Heikalo) and created a cleaner, more professional look for the publication.

Atlantic Books Today began publication with two issues in 1992, with support from the Atlantic Canada Opportunities Agency and the Canada Council for the Arts, eventually becoming a quarterly publication. It is now published by the Atlantic Publishers Marketing Association (APMA).

The latest issue is being distributed in bookstores, cafes and newspapers across the region (Globe and Mail, Truro Daily News, Metro News, Lighthouse Now, PEI Guardian, Cape Breton Post, The Coast, The Register/Advertiser, Telegram, Western Star, Telegraph Journal, Times Transcript, The Gleaner and others). You can also read it online at https://issuu.com/atlanticbookstoday/docs/abt82-digital.