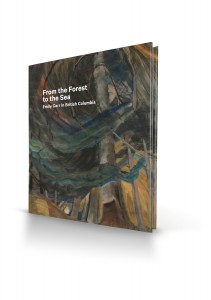 With this monumental volume celebrating Emily Carr, Fredericton’s Goose Lane Editions continues to lead the field in Canada as a world-class publisher of fine art books. It was published in conjunction with an exhibition of her paintings at London’s Dulwich Picture Gallery and the Art Gallery of Ontario. Sarah Milroy, Toronto writer and art critic, and director of the London Art Gallery Ian Dejardin edited the volume.

Through full-colour reproductions of over 150 paintings and drawings, photographs of First Nations artifacts and essays by artists and art critics, Carr emerges as a fearless visual explorer. Few words are spent recounting her quirky eccentricities, instead the emphasis is solely on her work that synthesized modern European and stylized Native North American sensibilities to produce art that is uniquely Canadian.

In her essay ‘Why Emily Carr Matters to Canadians’, Sarah Milroy proposes Carr’s prime role in the Canadian collective consciousness arises from three attributes. “First is her uncanny ability to capture the essence of this distinctive landscape,” she writes, directing readers to a painting of an ‘unnervingly alive’ cedar tree and a magnificent oceanscape filled with ‘the rapture of reflected light’.

“Second, Carr’s art is important as a record of a singular artist’s grappling with the great unanswerable question of the settler imagination: Where do I belong?” Her early training in San Francisco (1890-92) and London (1899) followed the tradition of English water colourists while her year (1910) in Paris introduced her to post-Impressionism and Fauvism. These influences, combined with those of eastern Canadian artists are only part of the Carr’s artistic exploration, however.

“Her third key attribute,” writes Milroy, “and the one most critical to her enduring legacy, is her enduring commitment to honouring the Native culture she encountered.”

Although referenced in Ian Desjardin’s essay, passages from Carr’s 1941 Governor General Award winning book Klee Wyck, which describes the six journeys she made along the coast from Victoria to the Haida Gwaii archipelago and the Skeena River between 1907 and 1930, would have made this volume a truly definitive work. However, inclusion of over 60 photographs of 19th century First Nations artifacts do bring immediacy to the artistic challenge Carr faced reconciling the ovoid and u-shaped lines that inform indigenous sculptures with the rectangular, two-dimensional constraints of European-style paintings, something earlier volumes have not done.

Not only is her work remarkable for its synthesis of form but also for her respect for First Nations culture at a time when their children were routinely seized and placed in residential schools. Rather than assuming the lofty, detached stance of a surveyor Carr positions herself on the ground, her gaze reaching upwards, straining to comprehend the mythic and emotional content of the totems and the villages.

While Carr’s paintings visually defined Canadian identity in the early 20th century, they are surprisingly relevant to 21st century global concerns including indigenous peoples’ land rights and land use and the effect it has on the environment. With visionary insight she saw the devastation of old-growth-forests as a transgression of the sacred, creating such poignant paintings as ‘Scorned as Timber, Beloved of the Sky’ (1935) which mourns the clear-cut forest while celebrating the remaining tree, a conduit between heaven and earth.

Indeed one cannot look at these works and not be moved by her artistic vision, which combines the material with the ethereal and embraces the divine. Her signature medium at this time, oil paint thinned with gasoline on paper, lent boldness and fluidity to what were her consummate works but at the same time has proved to be a conservatoire’s nightmare. How fortunate that regardless of what the ravages of time may destroy, her genius will endure thanks to this comprehensive volume.

From the Forest to the Sea: Emily Carr in British Columbia
edited by Sarah Milroy and Ian Dejardin
$50.00, hardcover, 302 pp.
Goose Lane Editions, 2015