Any Mummers ‘Lowed In? Christmas Mummering Traditions in Newfoundland and Labrador 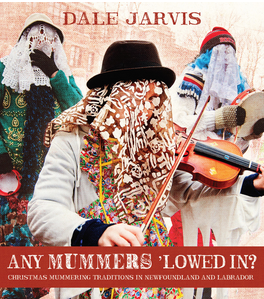 In Newfoundland and Labrador, groups of friends or family members would “rig up” or “janny up” or “mummer up”—piecing together a disguise using whatever they happened to have around the house. They might further disguise themselves by changing how they walk, stand, or move. Mummers would often dress in clothing of the opposite gender, to further confuse those they might meet along the way.

Once rigged up, mummers would travel to a neighbour’s house, oftentimes knocking ceremoniously on the door and demanding entry with a set phrase. What the mummers said varied from community to community. It might be a phrase such as “Any mummers allowed in?” or “Would ye have the jannies tonight?” Other mummers might say “Any Christmas?” or “Let the Mummers in?” Alan Guy, writing in 1956, remembered a poem that some mummers might recite: We’re rapping once more, To open the door, And let the dear mummers in.

As Guy’s poem relates, mummers would often knock or tap on the door to announce their presence, sometimes with a split of wood or stick. The knocking set the mummers apart from a normal visitor; in a small community it would be rare for neighbours to knock. One anonymous writer described the tradition sometime circa 1929:

Starting Christmas night, not Christmas eve, and continuing until January 6, you will meet hoards of curiously dressed and masked figures on the streets. Every youngster—and older people too—dress up in funny costumes, disguise their voices and go around from house to house. They go to the window and beg to be allowed in. They are unusually well-behaved too. If the voice inside says “no” they almost invariably reply “Thank You” and go away. But there is no fun unless you do let them in. The idea is for you to guess who they are, if you cannot guess it is within the rules of the game to strip them—if you think you are able. Remember there may be a dozen in the party, and you may have a dozen parties during the evening. They on their part try to get food—they call it “blackstuff,” meaning cake and wine. You see, they just cannot get food off their minds.

Dale Jarvis works as the Intangible Cultural Heritage Development Officer for the Heritage Foundation of Newfoundland and Labrador, helping communities to safeguard traditional culture, the only full-time provincially funded folklorist position in Canada. Dale holds a B.Sc. in anthropology/archaeology from Trent University, and a M.A. in folklore from Memorial University.