Falling into place with Anne Simpson

Anne Simpson is the author of three books of poetry: Light Falls Through You, winner of the Gerald Lampert Memorial Award and the Atlantic Poetry Prize; Loop, winner of the Griffin Poetry Prize and a finalist for the Governor General’s Award for Poetry; and, most recently, Quick. Her first novel, 2001’s Canterbury Beach, was shortlisted for the Thomas Head Raddall Atlantic Fiction Award. In 1997, her short story “Dreaming Snow” shared the Journey Prize, and in 1999 she was awarded the Bliss Carman Poetry Award. Simpson lives in Antigonish, Nova Scotia, where she helped establish the Writing Centre at St. Francis Xavier University. She recently spoke with ABT’s Stephen Clare about her latest full-length novel, Falling.

SC: What inspired you to write Falling?

AS: That’s a big question… I remember reading an article years ago in Saturday Night magazine about a young man who was obsessed with designing barrels to go over Niagara Falls. Though he was fairly young and somewhat naïve, his designs were quite intricate and he was clearly fixated on honing his craft. I put the article aside and soon after began to think about how a person could be so obsessed with something. That’s where this story began.

SC: Did the writing come quickly, or did you really need to work at it?

AS: It was a lot of work in the sense that I didn’t know which direction the work would take me. I would go one way and then realize that I needed to move in another direction altogether.

SC: That ties in with one of the book’s underlying themes.

AS: Yes it does. I’m the kind of writer who likes to just jump into the woods and start hacking at the trees. It’s a little like parachuting down and not knowing where you’re going to land. I don’t even have a compass. The interesting thing is that a lot of writers often don’t know what kinds of themes they are exploring until they get feedback from readers. 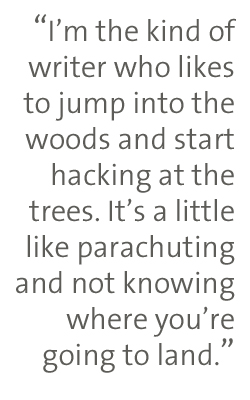 SC: Was that the most challenging aspect about writing the book?

AS: Yes, I think so. That, and the fact that by the time I was done I had written well over a dozen drafts of the story. Each time I thought I had come to some sort of closure, I went over what I had done and felt I could have gone deeper. And while it is certainly true that the place where a writer will eventually find his or her story is in the revision process, it requires a lot of hard work to get there. For this book, it was not only a case of constantly removing what was not needed, but of then adding what was not there.

SC: It must be quite an experience to build your own world.

AS: It’s interesting you should say that. I was walking with a friend recently and she said that writing a book and creating all these characters was sort of an adult version of having imaginary friends.

SC: What was the most rewarding part of the process?

AS: I remember that I was sitting in my backyard at one point –I think I was about half way through the novel– and I thought to myself, “I’ll never be able to finish this book, I just can’t do it.” And my husband, who was barbequing chicken and vegetables a few feet away, suggested that I just put it all aside and give myself some time to do nothing. His words were just what I needed to hear at that time.

SC: Well, what are men for anyway?

AS: Yes, a little bit of good advice and barbequing chicken.

SC: What did you learn during the process?

AS: A few things. I guess I learned not to be rash about anything and to find the story by digging deeper and deeper into the characters. By the same token, I’ve learned that the two are intricately intertwined in such a way that the characters are driving the story and that the story is helping those characters reveal and define themselves.

SC: What has the response been like so far?

AS: To be honest, I didn’t have very many people read it as I was writing it, but I did have a wonderful editor at McClelland & Stewart who was very instrumental in guiding me along in the same way a conductor might lead a symphony. Since then, a few people have read it and given me their reactions, which have been quite surprising.

SC: Do these opinions matter to you?

AS: It’s always tough to go through the critical aftermath, because a writer walks through this incredibly lengthy and taxing process of producing a work and it takes so long to get a book out there. However, the critical process can also be very constructive, as it affords the writer different perspectives, which is very important. The key is really to be open to these new ideas.

SC: Was there a grieving process of sorts once you had finished writing the book?

AS: I certainly thought a lot about the characters after putting the pen down, but I also inherently knew it had gone on long enough and that it was time to let go. It was all a very natural and organic process in that way. 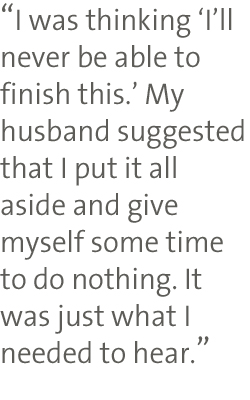 SC: What made you want to be a writer?

AS: Interestingly, I started as a painter at the Ontario College of Art before relocating to Antigonish 20 years ago. It was only after I arrived here that I realized that the visual arts could not do for me what literature could in terms of telling stories. This might be especially true in a smaller town, where it’s sometimes essential to have the ability to create your own entertainment.

SC: How do your family and friends feel about your ventures as a writer?

AS: They have all been wonderfully supportive. My parents and sisters have always been terrific that way. And my husband has also been very helpful in terms of talking through certain creative issues and logistical difficulties the story might be encountering. My kids, however, don’t think of me any as anything other than an ordinary mom, which is fine by me. To them, I’m still the lady who makes the macaroni and cheese.

SC: What makes a good book?

AS: A good book is one you can’t put down, even when there are parts that might drag along.

SC: Is Falling the type of book you would read?

AS: Yes, I suppose so, mostly because it has to do with characters and the way the story emerges from what they think, feel and do. In that way, the book is about the human spirit and how we deal with things. It’s not a book about grief, but about what people do after grief – how they continue to live and love in the world after something has shaken their foundations.

SC: What are your thoughts on the state of Canadian literature today?

AS: I think it’s thriving and very exciting to see what’s coming out of this country today. I’m not at all concerned about writers here or the quality of their work. What’s perhaps more in question is whether or not we will continue to have readers in the same way we did before, especially as there are so many distractions out there that compete for our attention.

SC: What about Atlantic Canadian literature?

AS: We are very fortunate to have the wonderful literary environment we do in this region, and I’m very proud to be a part of this unique and vibrant community.