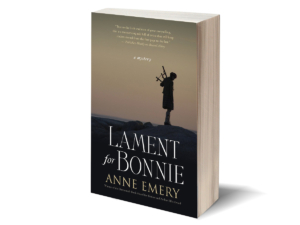 You know you are in the thick of a good mystery novel when you start becoming suspicious of characters you consider shady in the parking lot of your very own town. Anne Emery’s latest, Lament for Bonnie, will leave readers spooked and wary of their surroundings.

The novel is the story of 11-year-old Normie Collins, who is set for a summer holiday with her family in Cape Breton, visiting with extended relatives, learning to play the fiddle, immersed in the local culture. Then the beloved step-dancing, fiddling, twelve-year-old Bonnie MacDonald, the youngest member of Cape Breton’s famed Clan Donnie band, and second cousin to Normie, vanishes after a family party.

Normie Ruadh, as her Cape Breton relatives affectionately call her–for her red hair–is quickly immersed in the action, desperately wishing to find Bonnie. She learns about her extended family, including things she wishes she’d never come to know. Her spooky grandmother, Morag, whom Normie is so very fond of, has second sight, premonitions, intuitions and visions—and Normie has them too. Morag senses the presence of evil in the fictional village of Kinlochiel.

Lament for Bonnie is the ninth book in Anne Emery’s award-winning Collins-Burke mystery series. Here, young Normie is the daughter of the one-and-only lawyer and bluesman Monty Collins. Collins lends his legal services to the family (his wife Maura MacNeil is cousin to the siblings that make up Clan Donnie). Honorary family member Father Brennan Burke is along for the ride, lending a hand in the search, as he is spending his summer in Cape Breton along with the Collins family.

The story’s RCMP officers are forced to face the darkness beneath the beauty and vibrant culture of Cape Breton as they search for Bonnie. They also learn that this isn’t the only dark chapter for Clan Donnie.

The novel bounces back and forth in narration from young Normie to Monty Collins, to Sergeant Pierre Maguire–who left Montreal to escape this very kind of evil–as they all do what they can to find Bonnie and bring her back home.

The sections narrated by young Normie are realistic; the style and thought-process read very much like one would imagine an 11-year-old’s would.

Sergeant Maguire’s narration brings to mind questions of who might be capable of doing what kinds of things, and these are not comfortable thoughts. “It’s in all of us,” the sergeant says.

“Most people will never commit a crime like this, or any crime at all. But under the right–or the wrong–circumstances, under pressure, under who knows what, any of us can snap.”

A large cast of characters are introduced throughout the story: relatives, spouses, ex-spouses, townspeople, band groupies, even a crew of wedding guests, which makes for a real “whodunit” as suspicions are cast, redirected and cast again.

Lament takes Cape Breton’s Celtic heritage very seriously. A lot of Gaelic is spoken, and there are many references to strife amongst various clans. There’s a lot of Scottish history explained throughout, one example being a description of the Battle of Culloden. These passages may be of interest to some, but they do take away from the pace of the crime solving, mystery and suspense that Emery has cleverly created.

While an eleven-year-old narrates a substantial part of the book, there are deep and dark issues at play, one being that of domestic abuse in various forms. There’s the deadbeat McCurdy family, the rocky relationship between Nancy Campbell and her boyfriend Lee, the whisperings of trouble in Clan Donnie’s past. There’s a lot of family feuding, and the notion of what goes on behind closed doors. To Normie’s dismay, she learns that often times those who are abused in turn abuse others; filled with rage they take out on victims.

The book stands alone, but familiarity with key characters and backstories from previous books in the series are helpful.

Ultimately, Lament will leave readers wanting more of the series. To get to know Monty Collins and Father Burke, to know what happened between Monty and his wife Maura–why they were separated, what happened while they were together.

And perhaps there will be more to come from certain characters. Normie Collins’ second sight is only briefly touched on; she’s only beginning to understand the concept herself. It would also be interesting to read more about the particular clan of characters introduced in the book – set amongst the communities of Cape Breton.