Angel Lady of the Maritimes 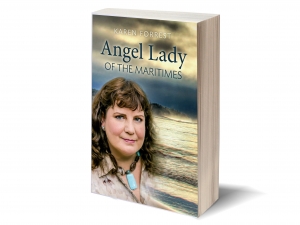 Courage is when you do something despite the intense fear you have. The more fear you have and yet you do what needs to be done despite the fear, the more courageous you are. I’ve been witness to many courageous acts by Canadian soldiers during my extensive military career.

When I was deployed to Bosnia, a soldier suffered from post-traumatic stress disorder (PTSD) from witnessing mass graves on his first Bosnian tour. Yet despite his fear, despite his anxiety, despite the nightmares, he voluntarily returned for another tour. His immense courage to face his fears head-on and do the job that needed to be done was truly a brave act. This particular soldier confessed to me that at the end of his patrols, he would go into his room and shake from fear. He would grasp his legs in an attempt to stop them from trembling and then went out the next day to suffer again. He was determined to face and control his fears so he could fulfill the military commitment he was trained for. And he did. Did he completely rid himself of his fears? No, but he faced them and did the job he was determined to do. This is spiritual courage.

Another courageous soldier witnessed his friend being killed in a land mine explosion in Afghanistan and nearly died himself. He briefly returned to Canada to physically, mentally, and spiritually recuperate. After short-term counselling with me, he demanded that, as his mental health nurse, I approve him mentally fit to go back to Afghanistan to finish his tour. I explicitly explained to him he didn’t have to go back to finish this dangerous tour, that there would be other tours, and I encouraged him to take a break and stay in Canada. However, despite his very realistic fears of being killed, he was determined to face them so he could finish the peacemaking tour he was trained for. No way was fear overcoming this soldier’s military duty that he felt honoured to fulfill.

I couldn’t begin to imagine the courage it took to go back to Afghanistan after his traumatizing experience. However, he was mentally and physically fit, so I approved and supported his decision to finish his mission. And I prayed to God to keep him safe. He did go back and survived the tour.

Here is what military life has taught me: If you are afraid, do it anyway. I try my best to uphold and live by this fear-busting motto.

Karen Forrest, the Angel Lady, is the Canadian best selling author of Angels of the Maritimes and Canadian Angels. An international expert in angelic communication and mediumship, Karen has appeared on Live at 5, Breakfast Television, and on radio shows.