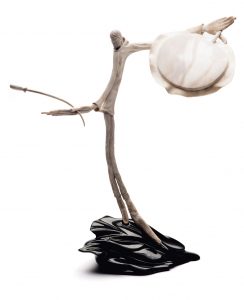 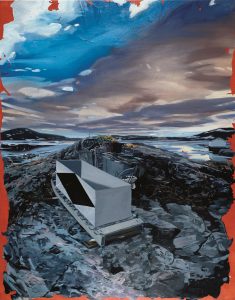 In the art world, it can often seem that every possible avenue of expression has been explored and studied to the point where there really is nothing new under the sun. In exhibition after exhibition, curators re-present the known and re-examine the over-examined. Often this is a result of audience demand–people want to see Impressionist painting, or Abstract Expressionism or Pop Art. They want the familiar re-packaged to make it palatable. As a result, exhibition seasons can seem to be the eternal return of the same.

It is refreshing, then, to be presented with something that is truly a first–a book (and exhibition) that presents an aspect of visual culture to wider Canadian audiences that has never been presented before. SakKijâjuk: Art and Craft from Nunatsiavut, an exhibition organized by the Rooms Provincial Art Gallery in Newfoundland, brings together the work of 47 Inuit artists from Nunatsiavut, the self-governing Inuit region of Labrador.

This work represents the visual culture of the most southern dwelling Inuit peoples in the world, a culture that has developed on the coast of Labrador and that has long had interactions with European culture, from the Vikings to Moravian missionaries. As a result, the visual culture is more hybrid than that of their northwesterly cousins and uses a wider variety of materials, such as wood and grasses not found above the tree line.

It is only recently that the work of artists from this region has been recognized as Inuit. When Newfoundland joined confederation in 1949, the provincial and federal governments could not agree on which level of government was to be responsible for the Indigenous peoples in the new province. While this dispute played out, Canadian Inuit art became a world recognized phenomenon in the ensuing decades, but artists and artisans in Labrador were not recognized as being part of this “brand.”

As Heather Igloliorte points out in her excellent introductory essay, the artists were not only unrecognized and unsupported, they often were accused of being inauthentic–of faking their own culture. It wasn’t until 1990 that the Labrador Inuit were permitted to use the “Igloo” brand on their work, belatedly certifying it as authentic Inuit art.

Despite this the people of Nunatsiavut continued to make art and craft and did so at the highest levels. Whether they were making useful day-to-day items such as boots, mitts or parkas or working in the more traditional fine arts of drawing, carving, painting and printmaking, these artists have made a unique contribution to Canadian visual art.

The book is divided into four sections, each one looking at a distinct generation of Nunatsiavut artists: Elders, Trailblazers, Fire Keepers and The Next Generation. The sections are introduced by one of the contributing writers, who are curators, artists and arts administrators, all with much experience in the world of visual arts and crafts. While there ends up being some repetition in these introductory essays, the collective weight of the texts serves to provide useful context for each section of colour plates. And it is the colour plates that are the heart of this book. Each artist is featured in at least two pages, often more, with one full-page illustration and a biography page with smaller images.

In each of the four sections the reader is introduced to artists from all over the regions, presented alphabetically. In the first section, Inutukait/Elders, Jenna Joyce Broomfield, an Inuk throat singer and educator from North West River, presents a selection of the works of the community’s elders, the people who embodied the traditions brought forward by the other three generations represented in the book and show. Approximately two-thirds of the 15 artists represented in this section have passed away. All of them were active in making art and craft in such a way as to influence the younger generations that followed.

The next generation, AkKusiuttet or Trailblazers, is represented by artists in their 50s and 60s and it is in this generation that we see carving, printmaking and other more familiar forms of Inuit art appear. A few of these artists have achieved significant recognition in their careers, including the jeweller Michael Massie and the sculptor and printmaker Gilbert Hay. As Aimee Chaulk, editor of Labrador’s Them Days Magazine, explains in her essay, many of these artists left Labrador to study art in the south and returned to help further the cultural development of Nunatsiavut.

The artists that were the students of this generation are grouped under the heading Ikualattisijet/Fire Keepers. With an introductory essay written by National Gallery of Canada curator Christine Lalonde, this section features artists who have lived and worked as artists within the context of the larger market for Inuit art, and the debates of the 1990s about what made Inuit art “authentic.”

The final section, made up primarily of emerging artists, is called Kingullet Kinguvâtsait or The Next Generation. These artists, many of whom have attended art schools in the south and currently live outside of Labrador, show the way that traditional forms have been adapted by succeeding generations to address their creative concerns. Photography, painting, film and video and fashion outnumber the traditional crafts of basket making or the art of carving. Whatever media these young artists use, their respect for and awareness of the roots of their traditions are apparent. Barry Pottle, an educator, artist and administrator (one of the generation of Fire Keepers) provides a succinct introduction that talks about the challenges facing young Inuk artists and the efforts they and their communities make to keep their cultural traditions vibrant and relevant in changing times.

What emerges from SakKijâjuk: Art and Craft from Nunatsiavut is a portrait of a community within which self-reliance, a respect for tradition and a willingness to push back against preconceptions are all valued and pursued. This book is an invaluable resource to anyone interested in art in Canada.

Canada tends to write history from the centre. Adding an Atlantic accent to our national history is a constant battle. Fifty years of Canadian art history is lumped under “The Group of Seven,” for instance, a story that is endlessly retold, despite all of the other artists and arts communities that were active at the same time. One of the most fascinating things about SakKijâjuk is learning that the same centralizing impulse was at operation in the history of Inuit art.

Thankfully, with this beautifully produced book, that history is being expanded. The art and craft of Nunatsiavut is taking its proper place in the conversation.