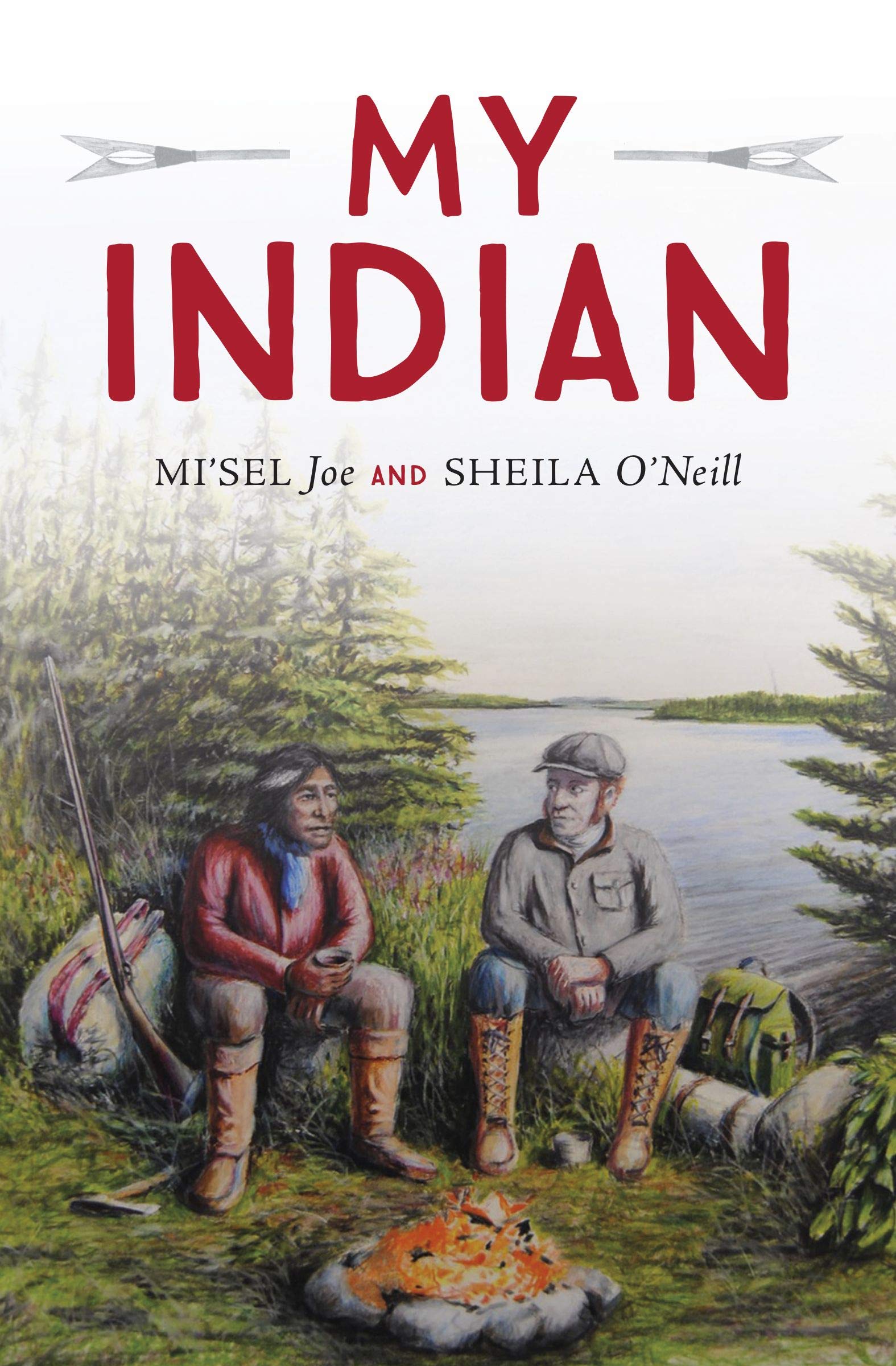 My Indian is a brilliant flip on the usual settler take in historical fiction, which has too often used the genocide of the Beothuk as dramatic backdrop to stories of settler in-fighting. Mi’sel Joe and Sheila O’Neill use William Epps Cormack’s diary of 1822, in which he calls his guide “my Indian,” to reclaim Sylvester Joe’s Mi’kmaw take on things.

In these chapters, we can feel the tension as Sylvester tries to keep his employer satisfied while keeping his promise to his Elders not to let the white man find a camp belonging to a group of Beothuk, who he ominously notes “have been driven back from their normal hunting grounds and river mouths [and] all but disappeared.”

Finally, one day we saw smoke. According to Cormack’s book, the date was October 11, and we had just made camp for the evening. I looked over Cormack’s shoulder and saw smoke off in the distance, on the other side of the lake. I knew the camp could not be the Beothuk people because it was too far south for them this time of year, and that was likely some of my own people. But I chose not to tell this to Cormack. I wanted to warn them that Cormack was searching for the Beothuk, and that I had made a promise to my Elders to keep our Beothuk brothers and sisters safe.

Cormack was excited; he thought that we had finally found a Beothuk encampment. It was near dark and too late to make our way around the lake to their campsite; we would have to wait until morning. Cormack sat down on a rock and took out his pipe. It looked as if he was in a deep-thinking mood. After a while Cormack looked at me and said, “We go to them in the morning. If they have broken camp, we follow them.”

I said to Cormack, “There was an understanding for many years between the Beothuk and the Mi’kmaq that the Beothuk were to use all the coast and flatlands for their territory, and my people stayed in the south part of the island. But since they have been driven back from their normal hunting grounds and river mouths, the Beothuk people have all but disappeared. We must approach them carefully and show them that we mean no harm.”

Cormack asked, “Are you telling me that the Micmac had a treaty with the red man in the sharing of territory?”

“I don’t know what you mean by treaty, but many years ago our people lived together as one group on the west coast at a place near Sandy Point, in Nujioqollek, what you call St. George’s Bay. The Mi’kmaq and Beothuk lived together peacefully and there was intermarriage, but all that changed when a disagreement happened over the killing of a weasel in the wrong season, and a young Beothuk boy was killed.”

Not giving Cormack a chance to ask any more questions, I said to him, “You stay here and have a fire and I will go and find a nice caribou so that we will have a gift of fresh meat and caribou hide to present in the morning.”

“No fire tonight, Indian. We don’t want to alert the Beothuk that we are near,” Cormack replied.

Leaving Cormack to fend for himself, I walked over a small hill, looking back to see if he was out of sight. I doubled back and headed towards the lake. I knew if I followed the big bog, I would be able to see across the lake from my high lookout.

When the darkness came, I was able to see the campfire and made my way down through the thick woods to the shore of the lake. Once on the shore, I stripped birchbark and made a birch torch that I waved back and forth, making sure that the Mi’kmaq could see my fire.

I knew that it was dark enough and far enough away from Cormack that he would not be able to see my fire. Soon I could hear paddles in the water and I was so happy to hear my language spoken for the first time since I left Miawpukek many moons ago. I was welcomed by much happiness and was invited to come to the camp of my Montagnais friend, James John, and his Mi’kmaw wife. James said to me, “We have food and my wife is in camp; she will make good food for you, my friend.”

On the way across the lake, I explained to my friend about Cormack, who I had left behind for the night. I told him, “Cormack is looking for the Beothuk, but I know they are gone to their winter campsite where they will be safe.”

“We will go and get Cormack in the morning, and maybe feed him for a few days. We will tell him our brothers and sisters, the Beothuk, are nowhere around here,” James said.

Before the sun was up my friend took me back over to the other side of the lake and returned to his camp. I found a nice mossy place in the woods, and after all the food we had eaten during the night, telling stories, and singing Mi’kmaw songs, I drifted off to sleep.

The loud boom of a musket woke me. For a while I was confused, but as soon as I became fully awake, I realized Cormack was close by, and judging by the sun it was well after noon time. Soon I heard a return book from across the lake and I knew I must go and meet the angry stag. I knew he was going to be mad.

“Indian, I thought you got lost, or deserted me, or got captured by the hostile Red Indians,” Cormack said when he saw me.

“Nei’n Aqalasie’w. It got too dark to walk back around the lake. I’m sorry you got worried. I would never desert you,” I responded.

Soon after, I saw my friend coming across the water. I knew Cormack would be happy now.

Cormack was so delighted to see the wikuom and the fire that he reminded me of a small boy going on his first hunt. With the abundance of food and hospitality, I hoped Cormack would spend a few days here resting. It made my heart feel good and a little homesick for my own village in Miawpukek.

During the night, Cormack presented James John with an offering of tobacco, and scolded me for failing to get a qalipu. I wondered what he would do if he knew I had spent the night before with the family. Cormack tried to bring the conversation around to the Beothuk people; however, we managed to distract him with Mi’kmaw songs and stories about my travels to St. John’s to meet the white man who I called Aqalasie’w, much to the delight of my friends. When asked why I called this man by such a name, I said, “If I am his Indian then he must me by White Man.” At this they smiled and nodded in agreement, fully understanding that no person can own another person.

It was almost dawn when we stopped talking and singing, our bellies full. The tired feeling of the last three weeks was making Cormack ready for sleep. While Cormack slept in the wikuom, James John and I went to the lakeshore. After lighting our pipes, we talked again for a long time about my journey across the island searching for our friends, the Beothuk.

I talked about my night walks to keep a lookout and to make sure the small band was not found by Cormack. I spoke again of my promise to our Elders not to lead this man to the Beothuk campsite. I wondered what would happen if we should stumble on a few wandering Beothuk who might be out on the land hunting for winter’s food. It was then that my friend said the Beothuk were only about eight or nine miles away, just a day’s walk from here. However, this late in the year they might be further north at their gathering place where they were hiding for the winter months. I thanked my friend for not speaking of any of this to Cormack.

Saqamaw Mi’sel Joe, LL D, CM, is the author of Muinji’j Becomes a Man and An Aboriginal Chief’s Journey. He has been the District Traditional Chief of Miawpukek First Nation since 1983, appointed by the late Grand Chief Donald Marshall. Mi’sel Joe is considered the Spiritual Chief of the Mi’kmaq of Newfoundland and Labrador.

Sheila O’Neill, BA, BEd, is from Kippens, NL, and is a member of Qalipu Mi’kmaq First Nation. Sheila is a Drum Carrier and carries many teachings passed down by respected Elders. As a founding member and past president of the Newfoundland Aboriginal Women’s Network (NAWN), she has been part of a grassroots movement of empowerment of Indigenous women within the island portion of Newfoundland and Labrador. She lives in St. John’s.