An engaging Acadian history (and a recipe) for young English readers 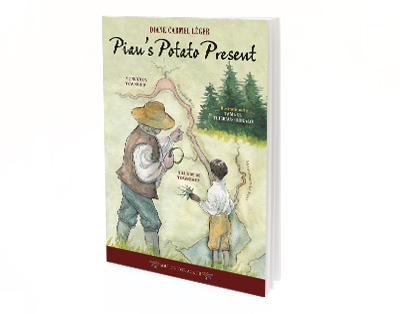 Award-winning author Diane Carmel Léger is best known to French readers for her for her La butte à Pétard trilogy, which recounts the expulsion of her Acadian an ancestors from their village of the same name. The history of those 18th-century Acadians fills many of her novels and pictures books, and newest among them is Piau’s Potato Present.

A translation of La patate cadeau ou la « vraie » histoire de la poutine râpée, this young readers’ book tells the story of two seemingly opposed cultures coming together to help one another survive. What I enjoyed most about at was its ability to impart the compulsory moral of a children’s book and share local history, while remaining an entertaining read.

The story opens near the Petcoudiac River, several years after the expulsion of the local Acadian population known as Le Grand Dérangement. Young Christian Treitz, a Pennsylvania German immigrant and his family are shivering and starving their way through a harsh winter.

As he searches the forest for food he encounters an fur-clad Acadian man. When Christian’s hacking cough arrests his escape from the bear-like stranger, the man pats Christian’s back as his mother would to help clear his lungs. Their meeting is a friendly one, although brief as Christian’s brother Abraham appears with a musket to fend off the interloper.

Over the coming year Christian and the Acadian meet several times. They exchange French and German words, and the Acadian shares his supplies and offers advice about living near the river. As with their first meeting, their exchanges are by necessity short and sweet. The German settlers were wary that the expelled Acadians would return to take back their lands, and the Acadian is determined to stay out of the fray.

Readers will later learn that he is modeled on Pierre Belliveau, a historic figure who helped many of the early Monckton Township settler families survive the first year in Canada.

By the end of the story, the Treitz family is grateful for Belliveau’s help and strike up a friendship through the exchange of food.

Tamara Thiébaux-Heikalo, who is known for her whimsical yet realistic imagery, illustrated the book. Her rustic, watercolour pictures suit the story of a hard life on the land and lend a brightness to a story filled with many melancholy moments as the reader watches German settlers chased off the helpful Belliveau.

This story is situated in history, but doesn’t beat the reader over the head with it. Depending on the age of the children with whom you share this tale, Léger has made it simple for you to add in additional history to suit any age. For example, when Christian an Belliveau first meet the Acadian says his people were sometimes known as the French Neutrals, a reference to the Acadians who refused to take up arms for or against either side in the French and Indian War.

And in the back of the book you’ll find an note outlining the story’s historical context; French and German glossaries for the words used in the story; and, perhaps best of all, a recipe for those delicious, potato dumplings la poutine râpée.