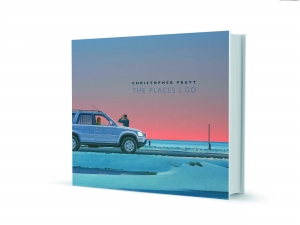 With the publication of this elegant volume, which accompanies Christopher Pratt’s recent six-month long exhibition at The Rooms in St. John’s, Goose Lane Editions continues to maintain its position as a leader in fine art publishing, through partnerships they’ve established with galleries across Canada.

Although he’s now in his 80th year and had his first solo exhibition at Memorial University in 1965, this volume is not a retrospective, but rather a selection of 30 full-colour reproductions of oil paintings created between 2001 and 2015, accompanied by brief but insightful essays. As well there are fascinating black and white photographic glimpses into a studio ruled by organization and excerpts from the meticulous journals and ‘car books’ he’s maintained daily since 1954, except for his years at Mount Allison University and the Glasgow School of Art, which describe the seasonal changes he observes through the windows of his home in St. Mary’s Bay and the scenes he encounters on Newfoundland’s secondary roads and secluded coves.

There’s a spaciousness to the book’s horizontal format and sophisticated design, free from distracting elements, that compliments Pratt’s controlled and measured realism and makes viewing his work on its pages as close to a gallery experience as possible.

In his studio, however, the universal transcends the particular. Through minimalist techniques and an exploration of space, time and memory Pratt transforms place, the Newfoundland landscape where earth and water meet sky, into something that’s almost otherworldly.