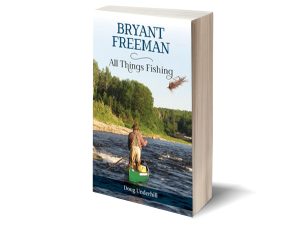 Every fisherman has at least one good story. Bryant Freeman, owner of a speciality-fly shop, Eskape Anglers in Riverview, NB, a gathering place for tyers and anglers, and a raconteur par excellence, has hundreds of them. And now, as recorded by Doug Underhill, they’re set to entertain a much wider audience who enjoy “all things fishing” and want to know how to tie Freeman’s speciality, the Carter’s bug, dye feathers and fur and why the name of his shop, where he provides “therapy and consulting for fly fishing” is “Eskape” rather than “Escape.”

“People might think I don’t know the proper spelling of ‘escape,’” he tells Underhill, “but such is not the case.” He likes the idea of escape and says “fishing is just that, an escape from the daily rat race and a chance to renew oneself getting back to nature.” But, as it turns out, the “esk” is more than an eye-catching misspelling. It means “where two rivers meet.” New Brunswickers will be familiar with North and South Esk, where the Northwest Miramichi and the Little Southwest Miramichi meet; in addition, there’s a river in Scotland named Esk.

There’s also a serious side to All Things Fishing. Freeman tackles conservation issues surrounding recreational fishing, for which he was recognized in 2010 with the NB Lieutenant-Governor’s Award. Freeman’s father was a self-appointed guardian of the Medway River in Nova Scotia, and he himself is a member of the Petitcodiac Riverkeepers Association. This group was instrumental in the move to restore the river by removing the gates in the causeway between Moncton and Riverview after the river was named one of the 10 most endangered in the world by National Geographic.

The pairing of Freeman and his biographer is a match made in angler’s paradise. A retired English teacher and sports/outdoors journalist who lives in Miramichi, Underhill has combined his love of language and the outdoors to produce 13 books, including Salmon Country, which was shortlisted for the Best Atlantic-Published Book Award in 2012. But what’s particularly noteworthy about his writing here is his sensitivity to his subject, allowing Freeman to speak for himself in this engaging biography.