Alison MacLeod’s Beloved Ghosts: Fearless stories of the presence of the absent 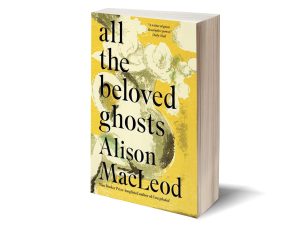 “Wisdom after the event is cheap indeed but go back.”

So begins “The Thaw,” the opening story in Alison MacLeod’s haunting and hedonistic new collection, All the Beloved Ghosts. The call for retrospection sets the stage for a series of elegiac, experimental tales, and heightens the poignancy of the paradox that, while we cannot go back and alter our fates, we do–and perhaps we must–return in reflection to examine our personal histories if we are to achieve any wisdom. What has gone remains stubbornly present in retelling.

The author of three novels and a story collection, currently teaching at Chichester, UK, MacLeod is attracted particularly to the mid 20th-century period. Her most recent novel, Unexploded, listed for the Man Booker Prize, is set in Second World War Britain, and she returns to this world in some of her new work.

Set in Cape Breton in the late 1920s, “The Thaw” is a fictionalized memoir of the final days in the life of Marjorie Genvieve MacLeod, the author’s great aunt. One of four surviving daughters of a large Catholic family bludgeoned by repeated tragedies, Marjorie, in her late 20s, has been saving for two years to buy a fashionable beaver-fur coat to wear to a local dance. MacLeod presents a delicately detailed portrait of a small industrial town and the diverse elements that populate it: Black steel workers from the southern states, a prescient Mi’kmaq Elder, the coexistence of Catholic and Protestant, rural solipsism and urban growth. The quietly intense narrative builds as Marjorie yearns for an emotional thaw that will lift the oppressive miasma of her mother’s grief, and chances some very small adventure in defiance of the invasive scrutiny of the small town. With a few well-placed images of slippery, thawing ice, MacLeod drops hints of the tragedy that is to visit the family once more.

“The Heart of Denis Noble” also finds inspiration in MacLeod’s own life and that of her elderly friend and colleague, Denis Noble. Ailing and nearly a ghost himself, he receives a freshly harvested heart from a deceased young man, a recent ghost. The heart now beating in Denis’s body alters him in amusing, unpredictable ways. The heart is a predictable enough trope, but the writing skillfully melds the metaphoric with the material.

Other ghosts in this collection are literary forebears and celebrities. Following writers like Raymond Carver, who have found inspiration in Anton Chekhov, a triptych of stories imagines the Russian writer’s declining years and death in a German spa town. “Sylvia Wears Pink in the Underworld” is MacLeod’s conversational eulogy to Sylvia Plath from the poet’s grave at Heptonstall, England. MacLeod empathizes with the American poet as a fellow ex-pat North American in Britain, learning to negotiate the subtle cultural chasms. The tone is elegiac, darkly humorous and deeply sensual, exploring the two women’s contrasting and overlapping terrain in a sparse, Plath-like desultory motion. “Dreaming Diana: Twelve Frames” offers a story in images of the tragic princess who lived and died in photographs. The action unfolds in vignettes, escalating in pace to the seemingly inevitable crash of the character’s psyche, self, marriage and motorcade.

Not entirely confined to historic subjects and settings, MacLeod also engages with current cultural phenomena, sometimes with a tone of ironic critique. “In Praise of Radical Fish” features teenaged jihadi fanboy, Limazah, who wrestles with an “embarrassing excess of good cheer” that threatens to dilute his extremist fervour and deflect his attention from rage to an appreciation of joy and beauty: “Brothers, I tell you solemnly: it is not easy to become radicalized in a seaside resort. There are distractions, there are deckchairs. There is all that soft, watery light.”

In “Oscillate Wildly,” named for an 80s era Smiths instrumental, and perhaps the finest morsel in this accomplished feast, middle-aged Irish Liam, post-heart attack, remembers a childhood visit with his French mother to Paris, where his oncle Gaston, the cemetery keeper, salvages the vandalized stone penis of the modernist angel on Oscar Wilde’s grave. The Uncle bequeaths the stone member to Liam, who hallucinates on his deathbed that he returns it and reanimates the castrated seraph:

… in those moments, in that dizzying commotion of shadows, air and light, Liam feels again the wild oscillations of his life: the swinging, the running, the trembling, the chucking up, the busking, the pushing and the humping; his sperm swimming, his babies babbling, Hamlet soliloquizing, his body handspringing, his eyelids blinking, the joy rising and those wings spreading, defiant and tremendous, as the train at the crossing tears past.

MacLeod is a gently playful but fearless writer who explores a range of narrative style. There is little nostalgia in these finely wrought stories of memory, of the inscrutable, insistent presence of the absent.