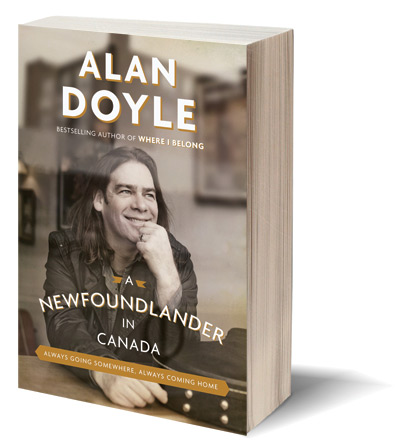 This peppy memoir of a life on the road and at home finds Alan Doyle, singer-songwriter and erstwhile front man for Great Big Sea, in fine form. Doyle has an eye for details and an ear for a good story, and a well-honed ability to play out a yarn of his own.

Where Doyle’s first book, Where I Belong, told the story of his poor-but-happy childhood in Petty Harbour, Newfoundland and set the stage for his rise with Great Big Sea, A Newfoundlander in Canada offers some of the gritty details of that rise. Doyle covers everything from the business-like way the band always conducted itself (finding ways to get paid not just by the venue they were playing, but also beer companies whose banners they flew on stage, paying themselves two-hundred-and-fifty dollars a week each, while putting all other proceeds into a band bank account for the future) to the realities of life on the Canadian road when your starting point is Newfoundland and Labrador (epic ferry crossings to Cape Breton, followed by hours and hours in cars just this side of breaking down, to crummy motel rooms shared with bandmates).

Though Doyle doesn’t come to any deep or particularly surprising insights about this country or its parts (Ontario is Newfoundland’s most popular and successful sibling; Manitoba is the sister you think you know everything about but you really don’t; Alberta is Newfoundland’s big brother who moved away before you were even born and on whose couch you will inevitably sleep sometime), his travelogue reveals a kind and gentle Canada where the people may occasionally be a little odd, but their hearts are in the right place.

There is one fly that sticks in the ointment Doyle slathers on. He writes of Great Big Sea being invited to play on Parliament Hill before the Queen and the band’s rightful excitement about the gig—only to discover organizers planned to drag the band on stage in a dory and introduce them as Newfies.

Doyle reminds us that while he was born in Canada, his parents and his grandparents were not. They were born Newfoundlanders, through and through. Not that long ago, Newfoundland and Labrador was still the punch line of a mean national joke.

Even in the relating of this tale, and the determined way in which Doyle dug in his heels with the show’s producers, he is deft enough to bring a light and comedic touch to the telling. It’s a generous spoonful of sugar Doyle deals out to help the medicine go down.

And really, that’s as political or controversial or revealing as this book gets. This is a book that entertains, provides a few comfortable hours in the thrall of a pretty great storyteller and a warm and cozy feeling about the Canada in which you live.

For all Canada’s actual diversity, it’s a pretty homogenous rendering Doyle serves up. His final words on the subject are a ringing endorsement of multiculturalism and its success, and to a critical reader, this conclusion arises out of a pretty shallow bed.

Still, there is good company and charm to be found on every page.