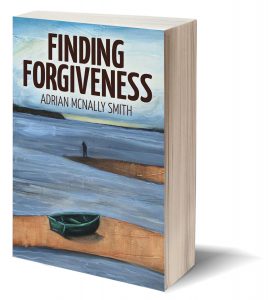 Adrian Smith grew up in a house full of secrets. Born in 1961 to churchgoing parents in small-town Prince Edward Island, he had what appeared to be a fairly normal life. His namesake father, an aloof man who favoured intellectual pursuits over the more “manly” hobbies of sports and drinking, had considered the priesthood before opting for a career as a child psychologist in the employ of the public school system, while his mother was a dutiful homemaker. The youngest of two boys, the author grew up adoring his father, while also doing his best to fit in with his peers. In many ways, this book tells the story of growing up and finding one’s place within rural Prince Edward Island for the two Adrian Smiths.

The story takes a decidedly different turn after the father’s death in 1988. While going through his father’s belongings, the author found photographs and written materials that led him to realize that his father had lived his life as a closeted homosexual. Having grown up in what he admits was a homophobic environment, the author went through an array of emotions, ranging from hurt and anger to eventual acceptance, with the latter only coming after years of therapy and introspection. Reconciling his father’s spirituality and apparent devotion to the Catholic liturgy proved difficult and led to many questions concerning his own sense of faith. As the nephew of a priest, this crisis of faith proved particularly disruptive for the author.

For many years Adrian kept his father’s secret. In part this was due to the stigma associated with homosexuality, but it was also out of fear of how this news would affect his aging mother. (While his parents slept in separate beds, the author believed his mother was oblivious to her husband’s true sexual orientation.) Following her death he began to open up, first to those closest to him and eventually to the broader community. He grew to appreciate the situation his father had faced, being born into a religious family in rural Prince Edward Island at the outset of the Great Depression, as well as the limited options available to him. With this, the sense of betrayal he once felt was replaced by an understanding of difficult choices. Besides, he reasoned, it was better to focus on the good he was told his father had done for the community working with troubled youth in the school system.

As the author came to grips with his father’s secret life and began the long road to addressing his reaction to this, sinister allegations emerged. As he shared his plans to write a book about his father with friends and family, multiple allegations of child molestation were levelled. Instantly the narrative changes from the sadness of repressed homosexuality in a society that did not accept it to the realization that his father, a seemingly pious man who worked with children for a living, was apparently guilty of such heinous actions.

This book was written as part of Adrian Smith’s healing process. Throughout, he attempts to understand why his father made the choices he did, the role of societal norms in all of this and how he was affected personally. It is, at times, very difficult to read due to its raw emotion and subject matter. Not only does the author address his quest to understand his father, he also provides an incredibly frank look into his own life and his ongoing difficulty with intimate relationships. Finding Forgiveness presents a rare glimpse into the long taboo subject of homosexuality in rural Prince Edward Island. As a book that addresses homosexuality, mental health, child molestation and the two Adrians’ relationship with the Catholic Church, it will undoubtedly raise eyebrows. Uncomfortable, but important, conversations are sure to follow. Many questions are raised in Finding Forgiveness and many remain unresolved. Such is to be expected in a work heavy on soul searching and self-evaluation. One thing is certain: whereas Adrian Smith was raised in a house full of secrets, his life today is, quite literally, an open book, and it makes for a most provocative read.