A Vision in Wood and Stone: Lively Writing and Elegant Photography 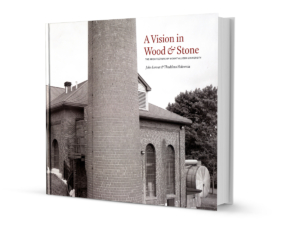 When architect and art historian John Leroux’s name is linked with photographer Thaddeus Holownia’s on a book cover you really can judge it by its cover and know this publication, by virtue of those names, will be of the highest calibre.

John Leroux is a graduate of the McGill School of Architecture, holds a Master’s degree in Canadian Art History from Concordia, has worked at award-winning architectural firms, authored books on Maritime architecture and teaches at the University of New Brunswick where he’s pursuing doctoral studies in cultural history.

But don’t let his academic qualifications lead you to think this volume recording the evolving history of the architecture of Mount Allison University is a compilation of dry, dusty facts pulled from the archives. Rather it’s a lively, engaging and thoughtful presentation of the influence architectural design has on the people who live, work and study within it. “While architecture may not change the world in its own right,” he writes, “our best structures certainly create an environment that might nurture the initiatives and ideas that will.”

Leroux’s text is accompanied by Holownia’s refined, elegant, black and white photography. Head of Mount Allison’s fine arts department, he’s widely recognized for the superb quality of his iconic photographs created with large format film cameras. The silver gelatine process he uses to develop them seems especially well suited to architecture, enhancing the strength, beauty and details of the materials and design.

The book also contains archival blueprints, drawings and photographs including an 1843 daguerreotype of the white painted neo-Classical Mount Allison Wesleyan Academy, designed by Samuel C. Bugbee of Saint John in response to Charles Allison’s desire to establish an institute of higher learning. Although it was consumed by fire in 1865, it set a standard of excellence which continued through those early years, through the ambitious redesigning and rebuilding of the campus in the 1960’s and on into the post-Modern era with the Purdy Crawford Centre for the Arts (2014) which Leroux calls one of the foremost instances of contemporary design in eastern Canada.

A Vision in Wood & Stone: The Architecture of Mount Allison University
by John Leroux and Thaddeus Holownia
Gaspereau Press