A tipple or two 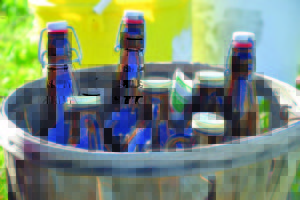 For better or worse, alcohol has always been a part of the Maritime and Canadian fabric, its historical, cultural, societal and economic significance stretching from pre-European times until today.

This is the subject of two fall titles, Canadian Spirits, by co-authors Stephen Beaumont and Christine Sismondo, and Adventures in Bubbles and Brine, by Philip Moscovitch. The former covers alcohol in its entirety—from sea to sea to sea, as proud Canadians like to say—while the latter delves into the fascinating world of fermented food and drink, alcohol-based and not, in Nova Scotia. And while each has a different approach, both deeply explore alcohol (and other treats), making for a perfect read with a glass or two of your favourite tipple.

Adventures in Bubbles and Brine, by Halifax-based writer and fermentation aficionado Philip Moscovitch, focuses specifically on Nova Scotia. Moscovitch takes us on a provincial tour of epicurean delights, providing compelling historical evidence and factual information while lacing the book with simple, straightforward how-to advice and eighteen recipes. His writing is clear and concise, with considerable research, history and first-hand knowledge of the subject matter, which is primarily the benefits of fermentation as a means of preserving food and drink.

The idea of terroir—in simple terms, the flavour of a place—and the growing movement to use local, fresh, naturally sourced ingredients contributes to an increased interest in fermented food and drink craft industries. Moscovitch provides fine anecdotal evidence for this as he tours the province, meeting people who adhere to making products using fermentation, tasting and learning as he goes.

Moscovitch readily admits he hasn’t covered everything happening in the Nova Scotia food and drink scene. He doesn’t write about mead, for example, or about craft distillation (covered completely in Canadian Spirits), acknowledging this is a personal book. He’s been experimenting and getting to know the province’s practitioners of food and beverage fermentation for about 20 years.

He divides the book into chapters that cover a wealth of information by food type. A longstanding Nova Scotia tradition of sauerkraut making/eating is followed by chapters on kimchi, vegetables, bread, dairy products and even meat (limited fermentation in the curing process but still fascinating for the process and artisanal products available). He also devotes chapters to beer, cider and wine, all of which have seen a recent upswing as regulations have become less cumbersome, opening doors for small-scale producers.

Informative and fun, Adventures in Bubbles and Brine covers the province while explaining the science and simplicity of food and drink fermentation in laypersons’ terms and is a pleasure to peruse and learn from.

About the bottle, by province

Markedly different in approach, co-authors Stephen Beaumont and Christine Sismondo have exhaustively catalogued the spectrum of craft distilleries across the country in the encyclopedic Canadian Spirits.

The wealth of insight to the industry—along with a provincial and regional breakdown of all (up to publication date; new ones keep opening) the craft distilleries—makes this the go-to book to learn where they are and what they offer.

And, not unlike craft brewers, this new wave of distillers (the big players get a scant chapter devoted to them) are inventive and unafraid to try all sorts of botanicals, food staples, flavours, scents and colours in their products. Mushroom-based and flavoured gin? Yep, it’s made by a handful of them. There’s apple pie moonshine, butter tart liqueur too, even bacon-infused and flavoured vodka, if that is your fancy.

The authors provide an intriguing history of each distillery’s startup, catalogue what they offer—cocktail bar, on-site sales, tastings, tours—and then highlight a few (maximum four, or this nearly  300-page book would be a lot heavier) of their best products with informed, accurate tasting notes.

Canadian Spirits will make your jaw drop at the range and ever-increasing number of urban and rural craft distilleries that dot the country. It is an industry that is moving towards maturation—consider that the first craft distillery, Cape Breton’s Glenora Distillery, was founded in 1990 and produced its first whisky a decade later. Today, many more distillers and distilleries combine state-of-the-art technology with chutzpah and flair, boosting the quality of spirits in this country to world-class status.

With intriguing sidebars, author favourites, cocktail recipes and an extensive glossary, Canadian Spirits is an indispensable guide to the diversity—in products, locations and stories—of an industry that is growing exponentially every year. My sense is a revised edition will be necessary in a year or two at most, and Sismondo and Beaumont are the team to do just that. Their current effort provides all you need to know about Canadian craft distillation, for now.  ■

Bill Macphereson is an award-winning fiction writer whose work has appeared in Zoomer, Up Here and Bounder, among others. He is the co-author of a historical non-fiction book and is currently working on a first novel.