A taste of chowder 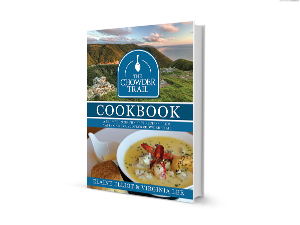 Travel to any restaurant in Nova Scotia worth its salt, and you will probably find a chowder of some sort on the menu. And with good reason: Nova Scotia is a province comprised of seafaring villages and towns, and hundreds of miles of coastline. With The Chowder Trail Cookbook, Virginia Lee and Elaine Elliott have curated a warm and hearty collection of recipes from some of Nova Scotia’s finest chefs found in those very same restaurants.

The collection includes tasty recipes that range from classic to contemporary. Chef Craig Flinn’s Smoked Yukon Gold Potato Chowder is counterpointed by Trout Point Lodge’s Haddock Chowder, while the Old Orchard Inn gives up its recipe for a Chipotle Mussel Chowder. The book separates the recipes into seven regions, from Yarmouth and the Acadian shores all the way to Cape Breton Island. Some regions yield more recipes than others, but the flavours found in their recipes are no less than stellar.