A Q&A With Marlene Stanton, author of Mercy, Mercy 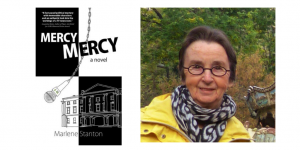 Stay Home #ReadAtlantic is a campaign from public libraries across Nova Scotia to provide unlimited access to 5 Atlantic Canadian eBooks in April and May of 2020. This week’s featured book is Marlene Stanton’s mystery novel, Mercy, Mercy.

Set on Prince Edward Island, Mercy, Mercy follows smart, sarcastic TV reporter Mercy Pepper as she struggles with feelings of guilt after her cameraman dies while on assignment with her. A news tape that he had hidden in his personal effects contains a secretly recorded conversation, and Mercy picks up the scent of corruption. She soon finds herself mired in the muck of 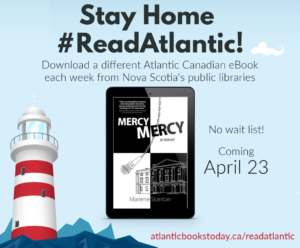 provincial politics—the power brokers and the opportunists and those willing to go to extreme measures for a piece of the pie.

Marlene Stanton spent more than twenty years in Charlottetown with CBC as a television news reporter, documentary writer/producer and assignment editor. Mercy, Mercy is her first book. She graciously agreed to join Atlantic Books Today for an Ask the Author session Q&A session on our Facebook page, which we’ve transcribed here with questions from ABT and from readers.

On the fiery Mercy Pepper…

Q: Is Mercy Pepper a version of Marlene Stanton?

A: Mercy doesn’t have my personality. She’s braver. But I’m just as funny!

Q: What is your favourite character trait of Mercy Pepper?

A: I like Mercy’s sarcastic humour, though sometimes it can be a little nasty which gets her into trouble. She might have to be taught a lesson soon!

On the writing process…

Q: As a mystery writer I imagine building tension is a primary objective when you write. How do you find the right balance between creating the tension you need, and giving the readers the calmer moments with your characters in order to get to know them well enough to be invested in their outcomes?

A: A really good question. It’s been a problem because I don’t start with an outline. But as the characters engaged I realized that every scene has to have its own tension, so that as the plot unfolds, tension can build there and it becomes obvious when it’s lagging. Characters set the pace!

Q: Do you have a writing routine? Do you set aside a certain amount of time for your fiction every day or do you wait for inspiration before you sit down to write?

A: Waiting for inspiration doesn’t work. But a routine, bum in chair will come up with something, and some days it’s great! Three hours in the a.m. is best.

A: The discipline to write comes from more than 20 years as a reporter with daily deadlines, sometimes several a day. No reporter can wait for inspiration. So it becomes a habit to write.

On the publishing process…

Q: How long did it take you to write Mercy, Mercy?

A: In actual writing time it probably took a year, but it sat in a drawer for a long time before a friend nagged me to dust it off and look for a publisher.

Q: How long did it take for you to go from conception to print?

A: Conception to print was many years because the first draft was left in a drawer for a long time. From final draft to print about two years.

Q: What has been the most unexpected part of becoming an author?

A: I don’t think we think of ourselves as authors until a publisher actually wants our work. Unexpected is the level of promotion that is required. I was a reporter so I observed others. Not used to being the object of attention.

On what’s next for Mercy Pepper…

Q: Is Mercy, Mercy the first book in a series, and if so, will the series be several books long?

A: Yes, Mercy Mercy is the 1st. I’m at work on the next in the series and will keep on if they work. I have to remind myself that I’m the same generation as Margaret Atwood and she already has 24 books!

Q: Is it easier to write the next book in the series now that the main character is so well-established? Or are there ways writing the second novel in a series is more difficult than the first?

A: I like this question. It’s more difficult because I can’t assume that the reader has read the first one. So some background about the characters who return in the new story is needed, but hard to know exactly how much without boring the reader. Mercy’s character is easier because she’s developing.

Q: You’ve mentioned elsewhere that the first book remained set in 2002 because of some of the story’s key elements. As the series progresses, will you explore changes in newsrooms/journalism?

A: I might have to do that… When we had the book launch in Charlottetown many of my former CBC workmates came and we talked about how reporters are much more isolated in using the recent technology, no longer work closely with camera crews. There used to be a lot more camaraderie and they miss that.