A memoir filled with interviews and memories of post-war St. John’s 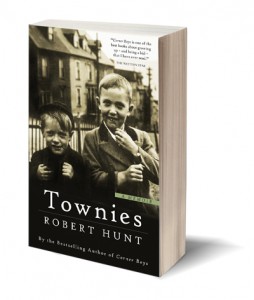 Townies is the follow-up to Robert Hunt’s popular coming-of-age memoir, Corner Boys, in which he recalls his rough-and-tumble childhood amid a working class neighborhood in post-war, downtown St. John’s. It’s a familiar and dependable formula for independent local publishers.

The book opens with Hunt and his friend, Malcolm “Dickie” White, watching in disbelief as their school goes up in flames, signalling Hunt’s uneasy relationship with the past. He describes the fistfights and tight fixes he confronted on Brazil Street and in the hallways of Holy Cross, run by the tyrannical Irish Christian Brothers, which took place decades before the secret horrors of Mount Cashel were finally unlocked and revealed to the world. If the book has a villain, it is them. “I reminded myself not to fool with these guys,” Hunt writes, “for to do so was like committing suicide. They were frightening.”

Townies attempts to balance Hunt’s voice with those of his childhood friends, presented as letters written to the author. However, the contrast in tone and texture is like oil and water. There’s sincerity in the author’s desire to evoke a time and place, and the book has some value for those interested in social history, but much of Robert Hunt’s Townies feels like footage salvaged from the cutting room floor.