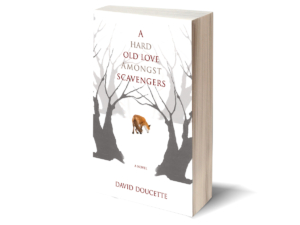 David Doucette’s episodic novel, A Hard Old Love Amongst Scavengers, is a writers’ novel and a fine example of what a talented author can do with material – or at least settings – often a bit worn thin around here.

The narrator, Miles MacPherson, in his mid 40s, has built a house on a mountain overlooking the sea. He’s perpetually building it, perpetually cursing his dwindling credit line, perpetually watching visitors struggle to climb the steep driveway (most choose to park on the road). Miles has travelled, had his share of adventures and now he just wants to look out over the sea, commune with nature and play his fiddle and guitar. People hear him from afar, hear his songs drifting down.

Doesn’t at all sound like a book I’d want to read.

But there’s more to this story than meets the plot, for there really isn’t much of one. At least not traditionally. Doucette doesn’t want to create a comfortable story. Miles has had a hard, traumatic life, though for most of the book we know little of this trauma (which, for the reader’s sake, I will not reveal). But when we do learn of the trauma – an overseas (Miles sometimes teaches ESL) event that would make the national news were it to happen – the book gains extra resonance.

Many writers would have led with the trauma or made it the central point of the novel, but Doucette wants to focus on the after effect, on how Miles tries to find solace in what’s around him. There’s a side-story of his lost gold glasses, of Charlie the Red Fox, of two crows, a baby moose, a high pile of red books. His recollection of his first night camping on the mountain (as a boy) is terrific (and hilarious), as is his aborted Cabot Trail hike with a Labradorian park ranger. Throughout Miles gives voice to nature, talks to (and for) animals, barely maintaining sanity, perhaps. Friends come and go and Miles forges through.

All stories, minor or major, are given equal billing to the trauma.

Why? Because that’s what life is like. A short-term event changes one’s life, yet the days are still 24 hours long, the nights still require sleep, time still needs passage. A person lives with trauma.

Style-wise, Doucette never strays from his strict narrative approach. His Joycean prose always evokes, never feels false or clichéd. It’s immediate, as when describing a coyote attack (he’s on a hillside in a snowstorm with a broken leg!), or an awkward man caught up in a nightmarish Mabou square dance. There’s no reader hand holding, no easy explanations, no softening of violence. Dialogue often requires a second scan, but then you get it.

I can imagine publisher after publisher turning the book down, requesting something happier, more saleable, with more dancing. The ending, perhaps purposefully, nudges toward this, noses in for a happy killing … I mean ending.

Well, not in Miles MacPherson’s world. Not like you’d expect.

A highly recommended, challenging, rewarding and moving work by an under-appreciated Canadian author.