A Halifax journalist’s suspenseful exposé on the Cuban Five 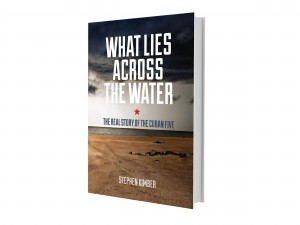 With surgeon-like skill, Kimber dissects, bottom up, an injustice perpetrated at the highest US levels on Cuban patriots acting for their government with few financial resources in a hostile foreign country. The Cuban Five’s spy efforts were hit and miss, but they did save lives. Using a reconstructive storytelling method, Kimber launches readers like ping-pong balls off landmarks throughout the Americas, our heads spinning with new names, scenes, and hotly contested facts at every turn of the page.

It is a challenging read, at times dense and confusing, but always intriguing, suspenseful, maddening. The expert and the uninitiated come away with a greater understanding of the bizarro intricacies of Cuban-American tensions, the habitual deceit rationalized by unshakeable ideological faith. But this international pissing contest is no fair fight. As Kimber’s exposé makes clear, it won’t be resolved before the case of the Cuban Five is. An important and riveting book.

What Lies Across the Water: The Real Story of the Cuban Five
by Stephen Kimber
$29.95, paperback, 296 pp.
Fernwood Publishing,
August 2013
Reviewed from an advance reading copy