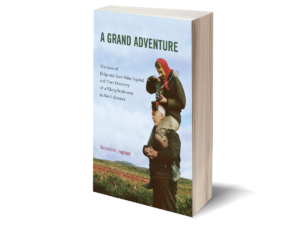 It’s an adventure book, a love story, double biography, scientific synopsis, feminist primer and modern history rolled into 438 pages. Helge and Anne Stine Ingstad were the Norwegian couple who identified and proved that the mysterious mounds at L’Anse Aux Meadows were the site of the only Viking settlement in North America.

The Ingstad’s discovery was considered so significant that the United Nations Educational, Scientific and Cultural Organization (UNESCO) named L’Anse Aux Meadows the world’s first World Heritage Site. It confirmed the encirclement of the earth by the human race. To reach that proof and status A Grand Adventure, written by the Ingstad’s daughter, recounts the academic sabotage, professional jealousies and bureaucratic interference that hampered and frustrated her parents. But that doesn’t start until three quarters of the way through the action-packed lives of this odd couple.

After three years practicing law, Helge Ingstad devoted his life in pursuit of one adventure after another. He spent years living as a trapper in Canada’s far north, was cowboy in the US west, searched for “wild Apaches” in the Serra Madres, explored ancient Viking sites in Greenland, became a regional governor in a northern Norwegian outpost. He wrote numerous books and lectured about his life and the lives of the Caribou Eaters, trapper life, wildlife, Canada’s north and Indigenous peoples. His popular, potboiler-style accounts elevated him to celebrity status.

Anne Stine (she’s never just Anne), like other Norwegians, was enthralled reading of Helge’s exploits. She began an active, multi-year correspondence with him that eventually caused her to break off an engagement to a German noble for this older, famous, near-penniless, self-centred adventurer.

When the Second World War broke out, Ingstad worked with relief agencies to help his countrymen. He possessed the self-confidence (bordering on arrogance) to ride roughshod over the collaborator government and German officers. In one episode he saved a hundred men from execution and throughout the war managed to get food, medicine and money for thousands of rural residents. His wartime exploits would be a book. His trapping and cowboy lives were several books.

While Anne Stine was encouraged to make a good marriage, Ingstad was able to justify his continued self-indulgence as the requirement to support his family. A shining example of his status as a less than attentive husband is shown in 1963. While taking the long way home to Norway from Newfoundland via Asia, he and his daughter decided to make a last-minute detour that meant missing the holidays. Ingstad send a telegram to Anne Stine: “Travelling to Himalaya, Merry Christmas.”

He was the stronger personality, which overshadowed Anne Stine’s professional status and undermined her self-confidence. A lot of women can identify with how society treated her as an afterthought. Ingstad was the media darling who everyone thought was in charge. She was the trained archeologist and the one overseeing the laborious technical work confirming the Viking presence at L’Anse Aux Meadows, yet she was treated as secondary to him. For example, in recognition of the Viking discovery, he was awarded a Royal Order in 1965. Anne Stine didn’t receive hers until 1979. When a US college offered him an honorary doctorate the invitation said, “We also hope that your wife can attend.”

A Grand Adventure is a no-holds barred look at an extraordinary couple. It looks at them as individuals, as a couple that struggled in its relationship and as partners who thrived in their work. While responsible for one of the greatest archeological discoveries, they lived their lives looking forward. A Grand Adventure is an inspiring read that traverses the 19th to 21st centuries.

A Grand Adventure, The Lives of Helge and Anne Stine Ingstad and Their Discovery of a Viking Settlement in North America
Benedicte Ingstad
McGill-Queen’s University Press