A Glimpse of Giller 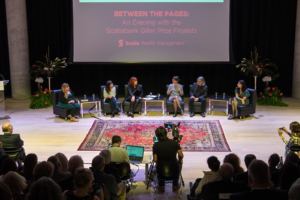 Photo by Trevor Allen for Scotiabank

On Friday, October 14, Halifax bibliophiles packed Paul O’Regan Hall at the Halifax Central Library for Between the Pages: An Evening with the Scotiabank Giller Prize Finalists. Between the Pages is a series of events in Vancouver, Toronto and Halifax, a joint author tour with Giller Prize finalists reading from their books and taking part in roundtable discussions.

The sold-out Halifax event was hosted by writer and actor Mary Walsh, who’s probably best known for co-creating This Hour Has 22 Minutes. After an entertaining intro where she joked that she, “worries about being called a national treasure because they usually like to keep treasure locked up,” she welcomed five of the six 2016 Giller Prize finalists: Mona Awad for 13 Ways of Looking at a Fat Girl, Gary Barwin for Yiddish for Pirates, Catherine Leroux for The Party Wall, Madeleine Thien for Do Not Say We Have Nothing, and Zoe Whittall for The Best Kind of People. Emma Donoghue, author of The Wonder, was unable to attend.

For the next half hour, the five authors took turns reading selections from their novels — revealing an interesting mix of humour, observation and very fine writing. Awad read a short story called “The von Furstenberg and I”, about a woman’s love-hate relationship with a dress and the salesperson who guards it, earning plenty of snickers from the audience. Barwin put on an entertaining reading as well, with his parrot-narrated selection.

Leroux enchanted the audience with her story of two lovers who seem to black out whenever they meet (although it seems like this subsides later on in their relationship, luckily for them).

Whittall and Thien’s selections had a more serious tone — while Whittall’s book examined the effect an accusation of sexual impropriety has on a family, Thien read a passage in which a character struggles with artistic insecurity related to a safe, sheltered past in a country ravaged by war and political unrest.

The last half of the event featured a roundtable discussion led by Walsh, where each finalist weighed in on questions related to their writing process and experiences. This may have been the best part of the evening — the discussion was candid and well considered, and Walsh infused the whole thing with plenty of humour. The conversation rambled from topic to topic, including the current relevancy of a book that examines the effect on body image, the idea that nonfiction is often stranger than fiction, and the story of a Jewish pirate who came out of retirement to retrieve some books.

The event was followed by a Scotiabank’s private reception at the Prince George Hotel, where attendees had the opportunity to meet the finalists.

There, we had the chance to talk to Thien and Awad about their Giller experiences so far.

Awad says she’s looking forward to getting her book into the hands of more people, since she’s very passionate about the subject matter of 13 Ways of Looking at a Fat Girl.

“I don’t think the fact of being in a body and having to be in culture is ever something we can come to terms with,” says Awad. “I wanted to look at how body image can really affect your life. And it’s still prevalent, no matter how PC we are, because we just aren’t comfortable in our skin.”

According to Awad, the feedback from her general readership has been incredible.

“It’s been kind of amazing,” she says. “Women especially, but men too, people of all ages and sizes have approached me and told me how they’ve connected with it. I can’t tell you how much that means to me.”

Thien has also been enjoying the opportunity to chat about her book with her readers.

“The best part of this has been meeting so many people who have already read the book,” she says. “It’s so new, it only came out in June. And seeing how people talk about the characters as if they are people they know intimately, and they’ve been living with them, and dreaming with them, and crying with them. I think this is the first time I’ve experienced that.”

People were slow to approach the finalists at first, but if the crowd that had gathered around the finalists by the middle of the night was any indication, readers enjoyed chatting about the books just as much as the authors did.

The Scotiabank Giller Prize winner will be announced at a gala on November 7, 2016. The event will be broadcast live on CBC.