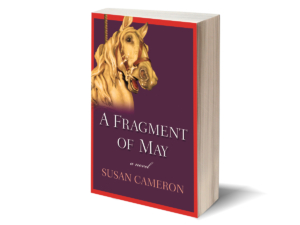 Read from an advance media copy.

As a coming-of-age novel set in Halifax in the late ’60s, A Fragment of May has certain limitations, a result perhaps, of the lack of fully-developed characters and an ending, which although admirable is too convenient and too contrived.

I just couldn’t seem to get inside the protagonist’s head and found it a challenge to really care about Anne’s search for meaning as she graduates from Mount Allison University, attempts a teaching career in Toronto, ends a romance with a drug-using boyfriend and returns to her affluent home in Halifax where she begins a passionless relationship with a soldier and a new career as an employment officer. Dissatisfied and unfulfilled by either, she inherits her aunt’s fortune which allows her, on the final page, to decide to give up both and use her inheritance to create a facility modelled on Jean Vanier’s l’Arche, thus giving purpose to her life.

As a social commentary, however, A Fragment of May makes a strong statement about the positive impact the Baby Boom generation has had regarding issues of equality and human rights, with Anne emerging as a quiet but pervasive symbol of attitudinal change.

Cameron’s novel reveals the soul-destroying social barriers which Anne’s post-war generation broke down, paving the way for people to live authentic lives. Later generations may be surprised to learn that until the late ’60s an out-of-wedlock pregnancy would have effectively ended a young woman’s teaching career. They may be unaware of the LGBT community’s need for utmost secrecy in order to be accepted, even within in their own families; of severely limited employment opportunities for visible minorities; of the marginalization of the intellectually challenged and of the widespread acceptance of these and other forms of inequality and outright discrimination, all issues Anne encounters.

Surely the enlightened attitudes which inform 21st century society and encourage full expression of human potential have their roots in the late ’60’s, and owe much to people like Cameron’s protagonist.

A Fragment of May
by Susan Cameron
Boularderie Island Press