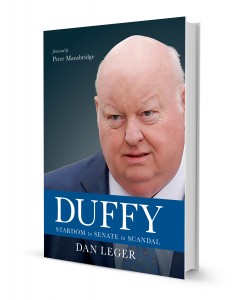 Dan Leger’s Duffy is a fine mix of Horatio Alger striving and Maritime schadenfreude. There are two books here: a sharp portrait of the young Duffy, a Charlottetown radio man desperate for acceptance at the heart of Canadian political power, and a chronicle of the 2013 Senate expense scandal that destroyed “the Old Duff.” The Senate story, the latter half of the book, synthesizes events that political-watchers know well, but Leger’s big-picture take of the whole mess is valuable. The account of Duffy’s rise is the real gem, revealing early portents of his later downfall.

Leger’s account of the pivot point between the two—the broadcaster’s exploiting of then-Liberal leader Stéphane Dion’s disastrous 2008 CTV interview, which likely earned him his Senate appointment, is gripping. A careful reader will also detect a lament for a time when influential Maritimers—Stanfield, MacEachen, LeBlanc—went to Ottawa and earned fame without shame.