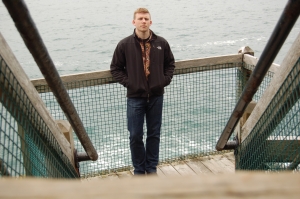 Writing is an act of translation for Kris Bertin, finding the words to show us his wildest images and stories

Kris Bertin, who grew up near Fredericton and works at Bearly’s House of Blues and Ribs in Halifax, wrote his first collection of stories, Bad Things Happen, over a seven-year period. The stories have often been described as gritty, and Quill & Quire described him as some kind of Alice Munro-Charles Bukowski hybrid, which is a mind-twisting image. But the most important thing about Bertin’s stories is that they mine deep into their character’s psyches as each one goes through some kind of personal hell, using fantastically descriptive language and images that stick. In this interview with Atlantic Books Today, Bertin reveals that the stories come easy, but the words are hard work:

Alexander MacLeod spoke glowingly of your imagery and unique use of language (e.g. “a man’s blonde toupee, wet and gleaming from the contents of a nearby plastic bottle of chicken stock”). How much of the imagery in the book is pure imagination and how much is inspired by the places you’ve been?

I have plenty of hands-on experience with a lot of the things in Bad Things Happen – garbage and knick knacks and dead animals and very weird people – so the raw imagery comes from somewhere, but its application is always a more carefully considered process. If, however, I was confined to only conjuring images that were real, or that I had really experienced, writing would be much less rewarding. Most of these things – especially the really surreal apparitions – are imagined. I don’t know how exactly it breaks down, but a lot of it is imagined. As for where any of that stuff comes from, I don’t really know. Dreams? Intrusive thoughts? Sometimes I see or hear things that aren’t there. I’ve never been able to talk about this without sounding crazy.

A lot of these sentences flow as if effortlessly from the page. What kind of work goes into constructing them?

There are a lot of rewrites, certainly, but in trying to make short, simple sentences sound right, I read a lot of them out loud. That’s how I edit. I did that with these answers, even. MacLeod, who helped me edit this book, mostly pushed me towards clarity, getting me closer to what I intended to write. This is my central difficulty. Trying to get close, with words, to what I’m seeing in my head. I feel like there are a whole bunch of different types of writers – word people, idea people, character people, narrative people – and I’m an imagination person. I’m good at imagining a story, but writing doesn’t quite happen in tandem. It’s almost an act of translation for me.

A recurring theme in many of these stories seems to be work. The drudgery of (usually blue-collar, occasionally very shady) jobs but also the fascinating human encounters that happen in the service industries. How have your own experiences in labour and service jobs informed and inspired these characters?

I dropped out of university and have been paying for it – through a series of very shitty jobs – ever since. I’ve tended bar for the last seven years, but I’ve been a bouncer, a cook, a call-centre phone rep, a mover, a general labourer, a landscaper and lots of other stuff. I’ve worked alongside ex-cons, sheltered suburban wimps, depressed rural kids, old drunks and other mournful dropouts like myself. This list also describes a great many characters in the book.

I’m also interested in the social structure of jobs. There’s a lot about work in “The Narrow Passage” – the garbageman story – where one man slowly becomes another man’s superior simply by realizing their hierarchy is based on nothing. A lot about physical pain, too. There’s some more in “Girl On Fire Escape,” where the narrator has noticed the difference between the people in the dish pit and those up front, and how he knows he’s regarded as sub-human as a result. These things fascinate me.

So many of your characters seem to be in in-between spaces, recovering from something, tempted by something or dealing with things that might push them over the edge. It’s a scary place but for your characters it also seems freeing, like they can try anything during that phase. What brings about this fascination with slightly unhinged states?

When you’re really stressed out, or on the brink of some breakdown, there’s something really liberating about it. The pressure we all face to be normal and healthy, to conform and achieve things, is significant. The thing about losing control is that as scary as it is, you can finally be yourself. In “Is Alive and Can Move,” the main character suffers from alcohol dementia and has struggled to stay clean, keep a job and remain sane. When finally he goes off the deep end, as scary as it is, there’s a kind of freedom there. It’s part of why giving up is so appealing, I think.

It’s sort of difficult to talk about this as if it’s central to my writing, because I’d argue it’s central to a lot of short fiction. A good story has stakes, and a story with very high stakes is often captivating. To me, a story is measurement of change. Having characters on the brink lets us chart some significant and surprising changes, whatever the outcome.

Some of these stories give a nice sense of resolution. One has four different endings! Others leave it more to the reader’s imagination. How do you know when a story is at its end?

In writing a story, I always have an ending in mind from the beginning, but it doesn’t always materialize. Sometimes I realize it doesn’t make sense for a character, or else, when I get there, the character does something completely different and it just works. In writing an ending, I truly believe that my job is to ask a question. Unless everyone’s dead at the end – which isn’t something I’m terribly interested in writing – a story is never over. I’m as interested in what happens on the page as what happens off. So for a lot of my stories, the question I’m asking is: what do you think happens next?

Some people don’t like that, and I get feedback from people who want to know everything that happens. It’s not a cheat, it’s a reflection of life – which, I’m sure you’ve noticed by now – just keeps going and going. When people ask for a neat and tidy ending, I tell them “sorry” and “too bad” and “that’s not what I’m interested in.”

You’re getting accolades from some literary bigwigs and I hear you have a couple novels on the go. What’s next for you?

I DO have some longer work I’ve been toiling away on for years, but it’s not ready to be seen. I have a couple novels, and a comic book, but for the time being, short fiction is my focus. I’ve signed on for another book of short stories with Biblioasis, so that’s what’s coming next.

I’ve been writing a lot of 10,000+ word stories, so I suspect when I put it all together, there’ll be less stories, but they’ll be longer. I like this idea because it offers something a little bit different than Bad Things Happen. I have a story about a cult-ish health guru who takes his wealthiest customers on a dangerous hike, a story about a woman obsessed with solving a mystery from 100 years ago – when a totally naked mute girl stumbled onto her family’s property and they took her in and raised her. There’s also “Cowan,” which was in The Walrus this fall, and a few others. All of it is quite different from this first book and has been really challenging. I’m really excited to put it all together and share it with all of you. I think you’ll like it.